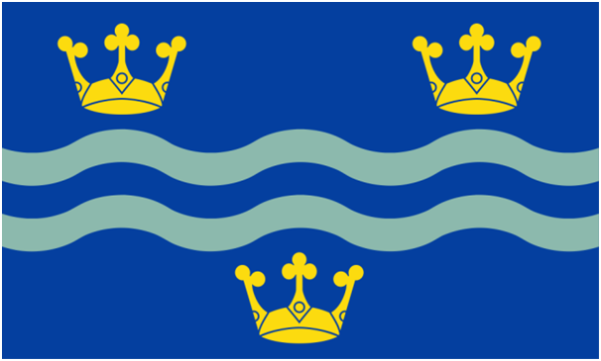 The Cambridgeshire flag was created by Brady Ells 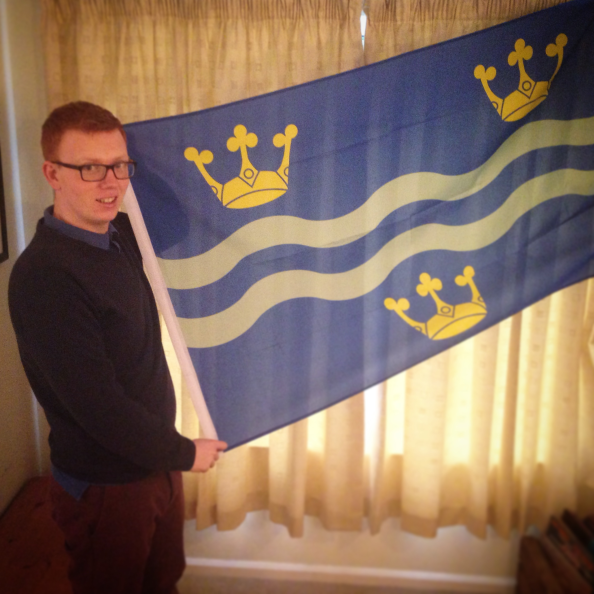 and registered on February 1st 2015, the day it was announced as the winning design in a competition held to select a flag for the county, which had been organised by adventurer and campaigner Andy Strangeway in conjunction with the Flag Institute. The competition ran in 2014 and was endorsed by several local authorities. This winning design was one of six finalists selected from the original submissions, by a selection panel that included local county councillors.

The three gold crowns represent East Anglia, in which Cambridgeshire is located. They are placed against a blue field which is the same shade used on the East Anglia Flag

The wavy lines represent the River Cam and are in the colours of Cambridge University.

Brady first conceived the design in 2010, originally using the gold colour of the crowns for the wavy lines of the river.

For the competition he changed the depiction of the crowns, reduced the number of waves to complement the crowns better, and altered their colour to the famous “Cambridge Blue” used by the university’s sports teams

Unlike other counties associated over the centuries with specific beasts or devices Cambridgeshire had borne no distinct, long associated, emblem. The insignia borne by the various administrative bodies that have existed in the county have been largely based on the royal arms of Scotland, as a result of the Scottish Crown’s tenure of the Earldom of Huntingdon and Cambridge during the twelfth and early thirteenth centuries.

The original Cambridgeshire County Council, which shared administrative duties in the county’s territory, with an Isle of Ely council, bore arms that were newly created for it in 1914.

These featured a broad wavy diagonal division of the shield, symbolic of the River Cam and the trade it brought to the county and the county’s many waterways. A gold double tressure, taken from the Scottish royal arms,

was included in token of the royal Scottish connection as described.

The Isle of Ely County Council bore arms that were derived from those of the Diocese of Ely, 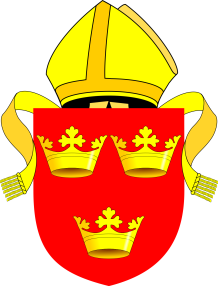 the body that administered the territory until 1837. These were red with three ducal coronets. These crowns were retained in the Ely council’s arms, along with white and blue wavy lines, indicative of the abundant local waterways, found in this territory termed an “isle”. 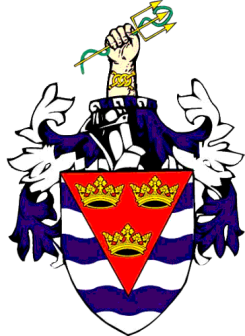 In 1965 these two administrations were merged and new arms were created by merging elements from its predecessors.

The wavy stripe became blue, which was a more logical colour for a representation of water and the three ducal crowns were placed along its length. However the background of the new shield looked even more Scottish as it was now made gold with the double tressure in red, as in the Scottish royal arms, shown above.

Further re-organisation in 1974 led to the creation of yet another set of arms.

This latest design was again based on the Scottish tressure, although this was now depicted in a rather novel realisation with a red border. Down the shield, wavy lines represented the many rivers of the county whilst straight ones (pallets) symbolised the drains and dykes that run through the Fenlands. These were all blue.

Such representation of the county’s watercourses has been a persistent theme and one that was taken up again in several of the submissions to the county flag competition.

The other two submissions referenced the county’s linkage with Cambridge University and the Fen tiger, a common theme in the county.

Prior to the competition, the armorial banner 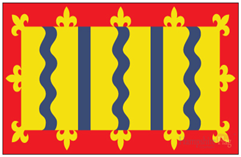 formed from the latest set of arms awarded to Cambridgeshire County Council, was commercially marketed as “Cambridgeshire flag”. In fact this banner represents just the county council which is the only body that may use it. It has never represented the county as an entity.

in Fen Ditton, and here

in Chatteris. It flies below 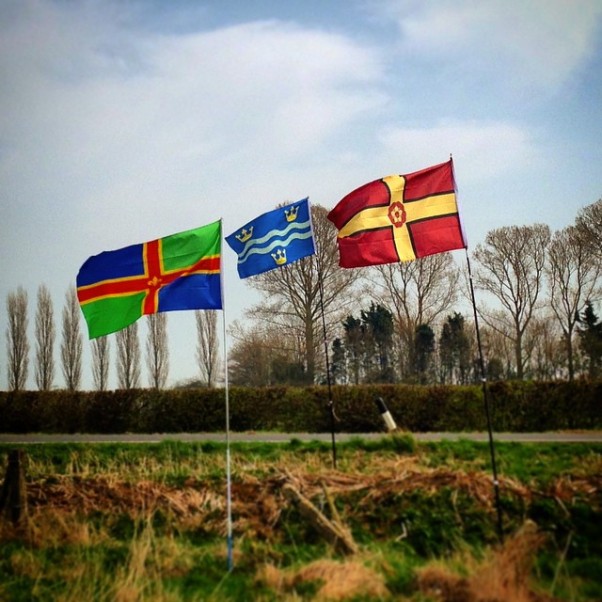 alongside the flags of Lincolnshire and Northamptonshire at the “tripoint” where all three counties meet and by a signpost here,

in neighbouring Lincolnshire. It is displayed here 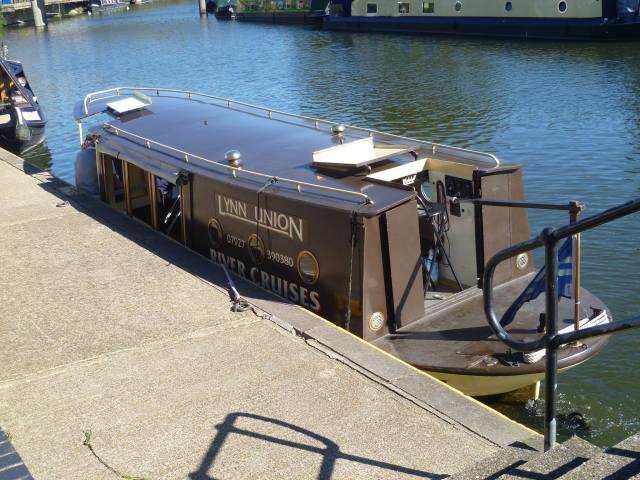 on the vessel “Lynn Union”, on the Great Ouse in Ely and is seen below

at the Lockhouse Escape Rooms in Cambridge.

In the below two photos 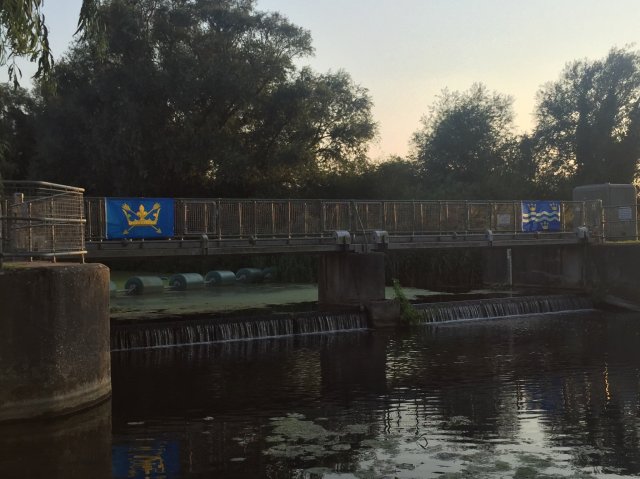 the Cambridgeshire and Suffolk flags mark a footbridge at Isleham Marina, spanning the river Larkh, which forms the mutual county boundary.

and features the county flag on its fixture lists

is used by the county’s Squash team 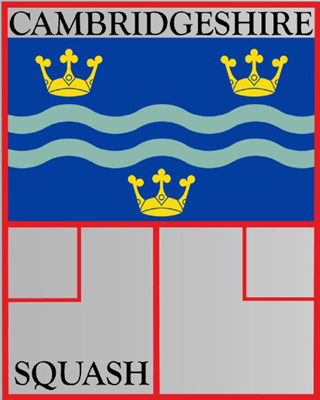 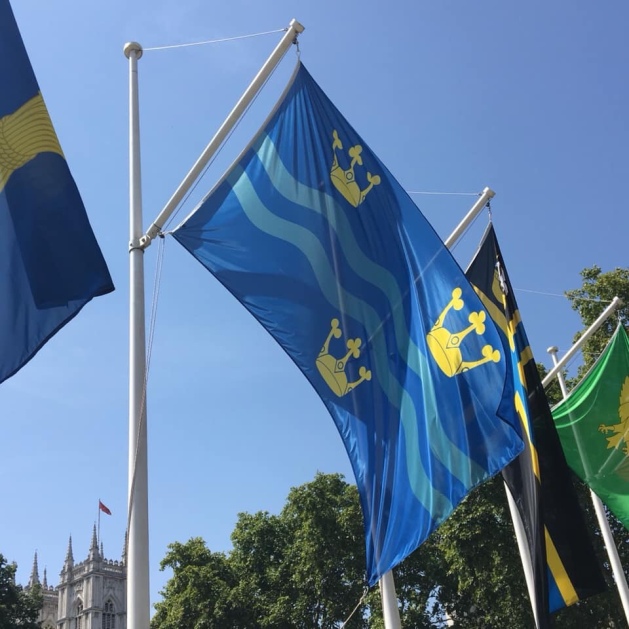 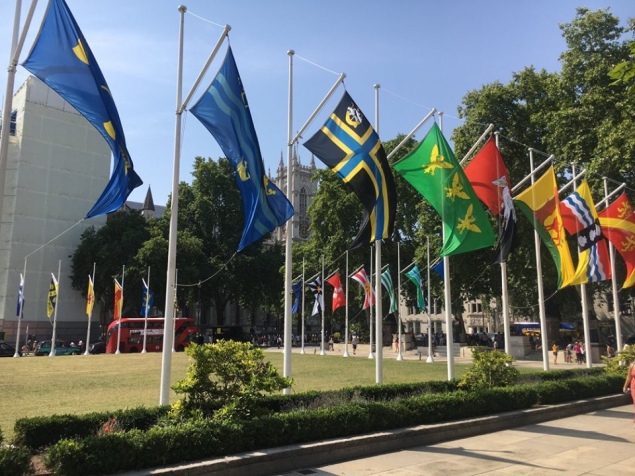