flag was registered in 2009. This followed an enthusiastic campaign promoting the design by The Huntingdonshire Society, at whose request it was eventually registered. The society pursued extensive local consultation which elicited several alternative ideas, featured in a July 4th, 2007 edition of the Hunts Post, shown below. 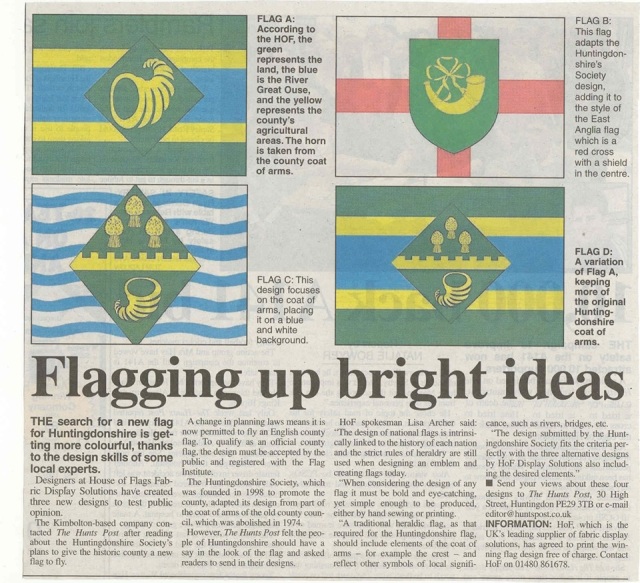 but none were deemed more appropriate than the finally registered design.

As with Westmorland, this county has struggled to maintain an evident identity as modern media and mapmakers 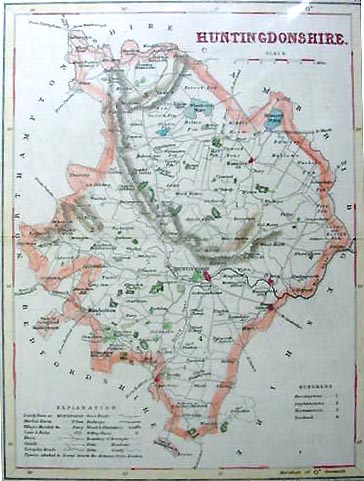 have consistently ignored it as a distinct entity. The Huntingdonshire Society was established following a shake-up of local government at the close of the twentieth century, after the county failed to gain the administrative status of a unitary authority. It had been felt that such a status might rekindle awareness of the existence of this geographically small shire

but lack of success in this quest led instead to the foundation of the society, with the same goal in mind. In 2002 the society established an annual “Huntingdonshire Day” on 25 April, the birthday of Oliver Cromwell

the county’s most famous son. The registration of a county flag was also seen as a definitive means of reaffirming the existence of Huntingdonshire. The society began promoting the idea of a county flag in June 2007. The design promoted was unique in origin

Whilst several county flags are armorial banners formed from the patterns on the shield in a coat of arms, or are in part derived from or based on them, the Huntingdonshire flag was originally held aloft by a red lion, as a feature of the crest,

of Huntingdonshire council, awarded in 1937.

The flag is heraldically described as “a Banner Vert charged with a Hunting Horn stringed Or”, that is, green with a gold, ribboned, hunting horn. The design of the flag was created as a “punning” reference to the county name, the Hunting horn symbolising Huntingdonshire. Such usage of a flag as a decorative feature in a coat of arms is relatively unusual and the design was wholly appropriate for deployment as the county flag – it seemed all but designed with this very purpose in mind! Rupert Barnes, Secretary of the Huntingdonshire Society explained: “The derivation of the hunting horn motif is obvious. It is found elsewhere too. The seal of Huntingdon 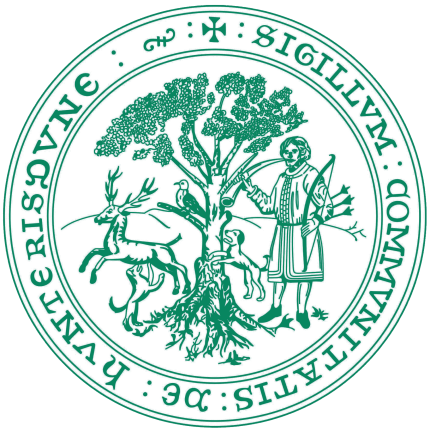 has a huntsman holding a horn.” The former Borough of Huntingdon and Godmanchester also featured two strung hunting horns on its shield.

Notably, before adaptation as a flag, the stringed hunting horn had been taken up as insignia by the county’s football association

where the gold against green, stringed hunting horn, is incorporated into a pattern with crossed keys.

The flag’s gold and green colouring conforms with that of the shield in the council arms, where the green background recalls the fertile fens of Huntingdonshire. Against this are golden wheatsheaves and a “horn of plenty” or cornucopia, symbolising a fruitful harvest.

based on the flag wielded by the lion in the arms, was completed by artist Ann-Georgina, wife of Rupert Barnes. In promoting the flag she stated;

“Huntingdonshire is an ancient county and one to be proud of. A county flag will let the people of Huntingdonshire show their loyalty. We hope, too, that visitors seeing the county flag will be reminded of a shire too-often forgotten. There is so much to be appreciated here that we do our fellow Britons a disservice if we stay hidden.”

A couple of years campaigning and popularising followed. In 2007 The Town and Country Planning (Control of Advertisements) (England) Regulations 2007 amended the law to allow the flying of an English county flag without planning permission. Rupert Barnes used this ideal occasion to raise the profile of the Hunts flag; he referred to how the Cornish flag had been accepted in that county and registered as a result of having been flown – quite unlawfully – on virtually every hotel, guesthouse, pub and restaurant wherever the writ of the Stannary (Cornwall’s ancient parliament) runs.”If they can do it in Cornwall, I’m hoping we can get it as widespread in Huntingdonshire,” Mr Barnes said. “If we can get a few town councils flying them and residents hanging them from their windows, that would be great.”

In 2009, without any evident opposition, the Huntingdonshire Society made a formal request to the Flag Institute to have the flag registered. Graham Bartram of the Flag Institute modified the proposed design a little and the finished article

was duly registered on June 25th.

Ahead of the registration however, the design had already proven popular with manufacturers with assorted articles bearing the flag having already been produced

In 2011, on April 25th, Huntingdonshire Day, the flag was raised

outside the Eland House HQ

of The Department of Communities and Local Government in London

as part of the department’s celebration of the nation’s historic counties.

On the same day, the Huntingdonshire Society presented a flag to local MP Jonathan Djanogly (seen below second from right), in Huntingdon,

where he was joined by society members John Smoothy left, Rupert Barnes, second from left, and Derek Norman, right. Reacting to the raising of the flag outside the DCLG, Rupert Barnes said

“We are delighted to see our county flag flying over the Communities department this week. Huntingdonshire day is a day for a county which has a great deal to celebrate. It is a shire of matchless beauty and charm, of pretty villages, broad green fields and anicent towns dupping their feet in the quiet river. Strangely, it is little known outside its borders but perhaps this welcome mark of recognition by the Communities department and the new flag will remind people of where Huntingdonshire is and why it is so loved by its own.”

Shortly afterwards, the flag was raised by county residents

and adorned the stand of the Huntingdonshire and Godmanchester Civic Society at a county event.

The Huntingdonshire flag is seen here

alongside the flags of Bedfordshire, right and Northamptonshire, centre, at the “tripoint” where the three counties meet. 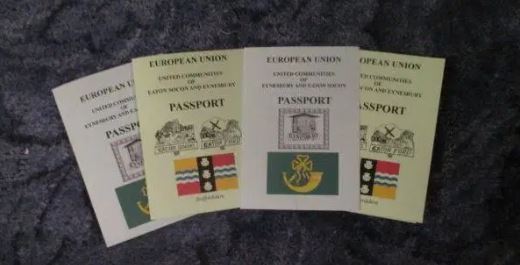 , were issued by the Eaton Community Association for people passing over the Willow Bridge 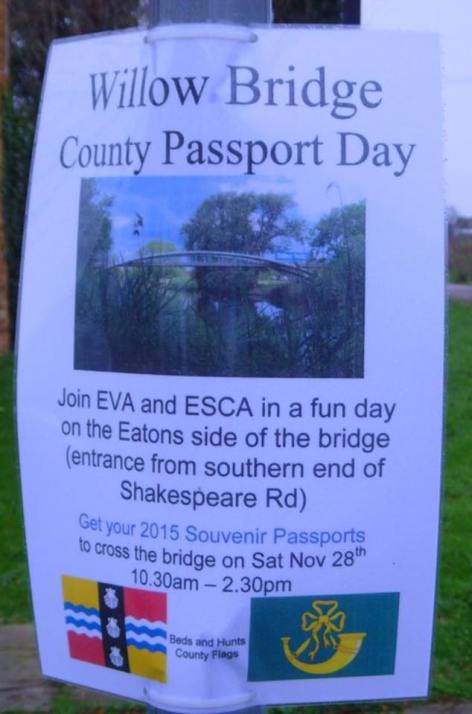 which connects the two counties 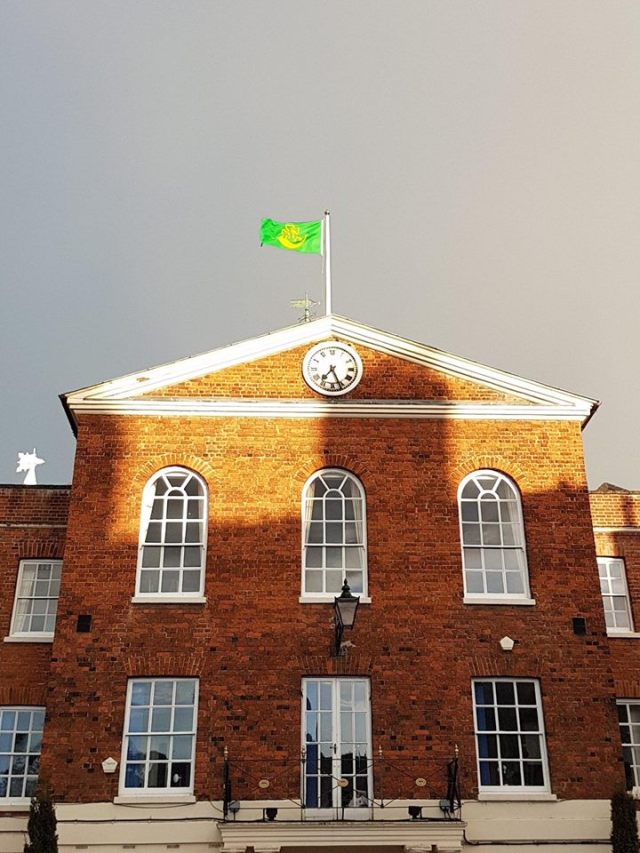 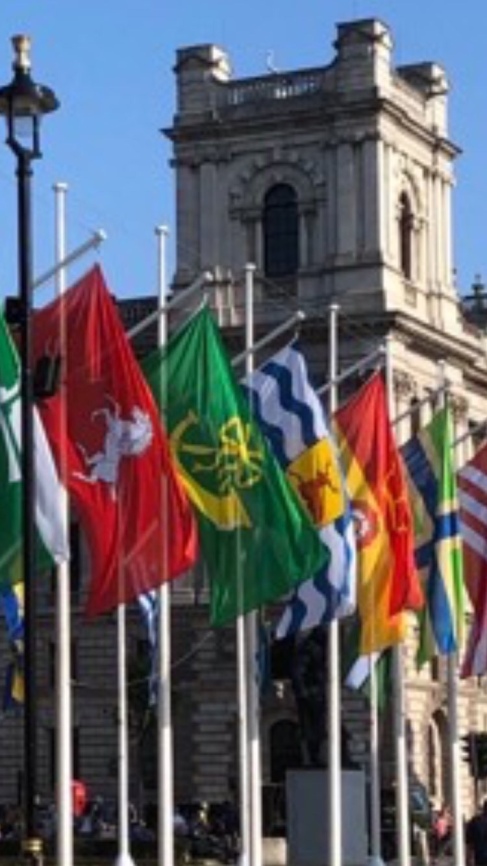