A number of designs have been proposed for those remaining counties, some county divisions, islands and two regions, which have yet to register a flag. Traditional designs that have been associated with their respective counties as arms or similar devices, could be easily deployed as county flags on the basis of their traditional local usage, see the paragraphs on “TYPES OF FLAGS” at the ABOUT page. A range of novel designs have been created for other counties which have a less clear cut symbolic history, albeit that they may be linked to a certain emblem, numerous Leicestershire bodies, for example, make use of the county’s recognised emblem of a running fox; a design incorporating this traditional county emblem has thus been proposed. For such counties the adoption of a flag will likely require a competition or similar selection process, where these featured proposals may be given due consideration. A guide which includes advice on establishing and running a flag competition, (pages 6,7 and 8) is provided by the Flag Institute.

The Lathes Of Kent 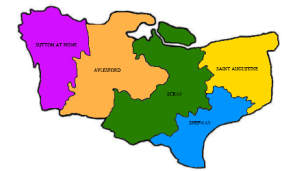 The Parts Of Lincolnshire