Dorset’s vibrant and cheery flag was registered in 2008 (September 16th) as the winner of a competition to select a flag for the county, set up by the local council in cooperation with the Flag Institute. This followed a campaign to see the flag registered on the basis of popular use and appeal, as had occurred with the flag of Pembrokeshire. In the wake of its burgeoning popularity the local council became involved, after initial reluctance and the flag was duly entered into the competition, which it won by an overwhelming majority.

Whilst using colours associated with the county, the flag is an entirely novel design, for Dorset was not associated with any ancient traditional symbol, such as the red rose of Lancashire or the Buckinghamshire swan. Unlike most counties, where the civic arms borne by current or former councils, usually feature a charge relating directly to the locality – a symbol used by local rulers for several centuries for example – the arms of the Dorset County Council 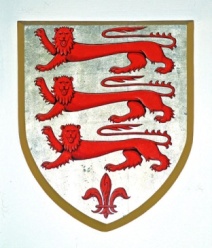 exhibited nothing that bespoke the county at all.

This itself depicted the one time Royal Arms, which quartered the strewn gold fleur-de-lis pattern on blue, of France, with the three gold lions on red of England, set against the old castle that used to stand in the town.

In 1889, upon its creation, the County Council settled on a seal of its own, taking the same three lions passant of England, as appeared in the Dorchester seal. The council formally applied for arms in 1949, the resultant design again echoed the emblem used by Dorchester, combing the three lions of England with a single French fleur-de- lis, all in red, against a white background. The choice of these specific colours seems to be unaccounted for but aside from this aspect there was nothing about these arms that was particularly symbolic or distinctive of the county. Therefore, when an armorial banner formed from these arms,

was subsequently made commercially available and misleadingly marketed as the “county flag of Dorset” it was a particularly inapt design for this use; not only did it actually represent only the council as the bearer of the arms but as seen, the pattern had no reference to the county of Dorset but rather to the kingdoms of England and France! Additionally the arms did not translate well as a flag – the elongated bodies, further squashed by the “flower” at the base, were not easily rendered by a child’s hand.

Accordingly, dissatisfied with this putative county flag, Dorset people sought something more meaningful and better designed. In 2006 Dave White of Dorchester engaged with Dorset expatriate, Stephen Coombs, to design a flag for the county. Stephen had considered a design, to be dedicated to St.Wite 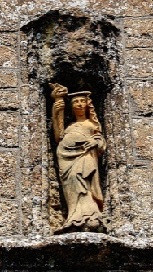 a local woman from the west of the county who worked tirelessly for the local community, killed during a Viking attack in 831AD. A student of heraldry, alive to the principles of good design as promoted by the Flag Institute and others, Stephen wanted a flag that was simple, easy to recognise and draw. Conscious of the flags borne by Dorset’s neighbours, Cornwall’s ancient white cross

as well as other cross flags such as Lincolnshire

he too opted  for a cross pattern which he felt had become something of a standard pattern for English county flags.

The red and white of the Council’s arms were the source for his chosen colours but he wanted to add a third tincture for more distinctiveness. Recognising that red, gold (yellow) and white was a colour combination rarely seen on flags, this was the set he opted for. As with the flag of Devon he proposed a flag with a cross that was edged (in heraldic terms “fimbriated”) and so suggested a yellow flag bearing a red edged, white cross. Unlike the Devonian cross, the proposed Dorset cross complied with “the rule of tincture” whereby dark colours (red, black, blue and green) are only placed on, or touch, the light colours, white and yellow. This makes for a much more effective flag, more visible and with more impact.

Dave White created the first illustration of this idea

which led to a discussion and eventual agreement between the two, regarding the proportions of the cross and its edging

In the midst of this discussion Dave pointed out that the colours of the flag were even more suitable than Stephen had realised, reminding him that in the full achievement of arms borne by the council,

the dragon supporters of the shield were of course golden. Thus all three colours from the council arms were represented in the design of the proposed flag. Having settled on a design that they were happy with, Dave discovered that the council’s armorial banner was being marketed as the Dorset county flag. He reacted by writing to the local Dorset Echo newspaper, questioning the provenance of this “flag” and asking on what basis it was being sold as the Dorset Flag.

Dave’s letter prompted quite a response with a number of respondents agreeing that there should be a proper Dorset flag and when he wrote back to the Dorset Evening Echo with the design he and Stephen had produced, the “Saint Wite’s Cross”

the newspaper published it. Realising there was sufficient support for the idea of a county flag Dave created a website and a forum to discuss the matter further. Ideas were knocked back and forth but nothing substantial or better than the original creation emerged from this online debate. At this stage, Jason Saber, a member of the Flag Institute, impressed by the simple striking design and feeling that it deserved greater publicity, contacted Dave White, encouraging him to abandon any further search for other proposals and to stick with a clearly superior design. Dave then focussed his attention on promoting the Saint Wite’s Cross, raising finance to secure production of the flag and related products and garnering publicity and support with local firms and media.

With John Peak of the Dorset County Council (DCC) indicating that the DCC had no authority to create a flag and effectively brushing the matter aside, the plan was to achieve registration for Saint Wite’s Cross by continued use and appearance. The flag of Pembrokeshire had been created in the 1970s and after years of continued recognition as the de facto flag of the county, it was duly registered. Something similar was planned in Dorset; if the council was not interested in the project and did not consider itself competent to make any decision on the matter, then the flag could become the de facto county flag by dint of its very existence and persistence. 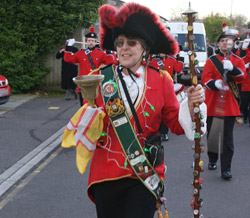 , they too were pursuing a flag for the county and joined forces with Dave White to keep pushing St Wite’s Cross, which was later renamed the “Dorset Cross”. Chris, seen below with Jacquie and fellow Dorset town criers

In April 2008 the flags and stickers which Dave had ordered became available to the public. In the midst of this burgeoning support for the Dorset Cross and continued appearance in the local media, John Peake of the DCC suddenly reversed the council’s decision in June and issued a press release indicating that he wanted to see many more designs from all over Dorset and that there would now be a competition and vote to select the best. He announced,

“Over the years the idea of a flag has surfaced several times. Recent work by a group promoting a flag called the Dorset Cross has shown that there is a lot of support for the idea. Through local newspapers I asked residents to submit their designs and we now have numerous possibilities. You now have until the end of June to send in any last minute entries then the process to choose one will begin.”

A judging panel consisting of, the Lord-Lieutenant Mrs Anthony Pitt-Rivers 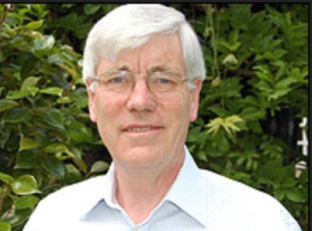 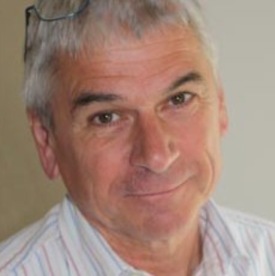 ; Anna Barker and Omar Sharif, Dorset’s two Members of Youth Parliament and the editor of Dorset Life was put together and chaired by Graham Bartram

of the Flag Institute. The panel selected four designs

to be voted on – including the Dorset Cross. Voting started on 12th August and went through to 12th September. Votes were counted on the 16th September 2008. Some 4000 votes were counted with the Dorset Cross achieving 54% of these with 2086 votes. The next closest only achieved 22% (856 votes). The Dorset Cross was thus now Dorset’s flag! John Peake declared “It’s wonderful that so many people have voted and that we now have a symbol for the county we all love. I hope I shall soon see flags flying all over the county and beyond.”

John Peake of the DCC congratulates Dave White (right) after the Dorset Cross’s success in the Dorset flag competition.

Dorset’s flag is most distinctive with a unique colour combination amongst county flags; its warm yellow colour tends to catch the attention. It is a meaningful colour as “Golden Cap” is the name of the highest point on the county’s famed Jurassic Coast

in Shaftesbury, is a location that has featured often in advertising. Dorset in Spring is also notably golden when the rapeseed fields are in bloom

It may also be noted that the uniform that was worn when the militia was raised to fight off the Duke of Monmouth’s uprising in 1685, was a red coat with yellow facings

while the drummers’ outfit was the reverse, with yellow coats and red facings

an arrangement clearly reflected in the red edging on yellow of the Dorset flag.

All three colours are also found in the coat of arms of Sherborne Abbey,

emblazed as “Gules, a cross argent, a crozier or, piercing the cross”. Founded by St. Aldhelm in AD 705, the edifice

is one of England’s most beautiful parish churches and being for many the ‘cathedral of Dorset’, a resplendent county landmark, recalled in the county flag.

combines the colours of the national flag

of England with those of the regional flag

of Wessex. Coincidentally, the flag also incorporates the banner of the generally recognised patron saint of Wessex, Aldhelm who founded Sherborne Abbey, as noted.

The flag was soon manufactured and began to appear in profusion 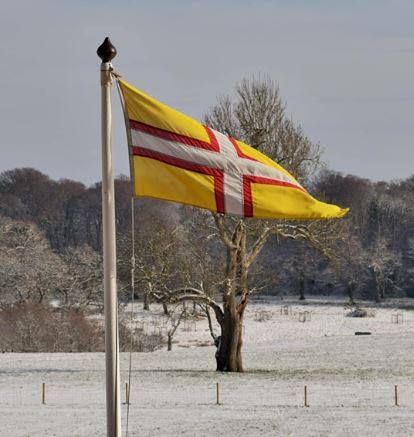 and in many forms

and was depicted in humorous vein, to promote a local music event!

Gratifyingly, the flag has also been used to mark county produce 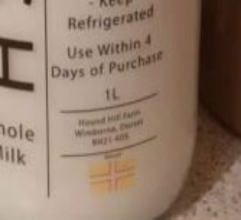 It was blessed at both a pagan ceremony at Stonehenge 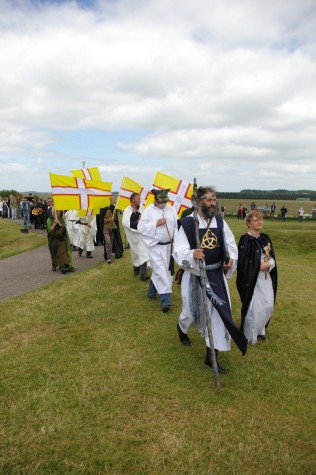 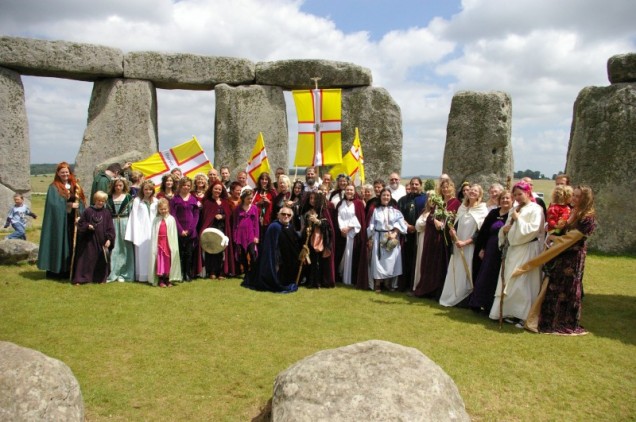 and by the Bishop of Sherborne

The county flag has been taken up by local football supporters,

adapted for the kits of the county’s lady roller derby league team, the Dorset Roller Girls

and even inspired the production of a local ale!

The flag is seen below

alongside the flag of Hampshire, at their mutual boundary, just west of Bournemouth. The actual boundary has been picked out on the tarmac path seen here 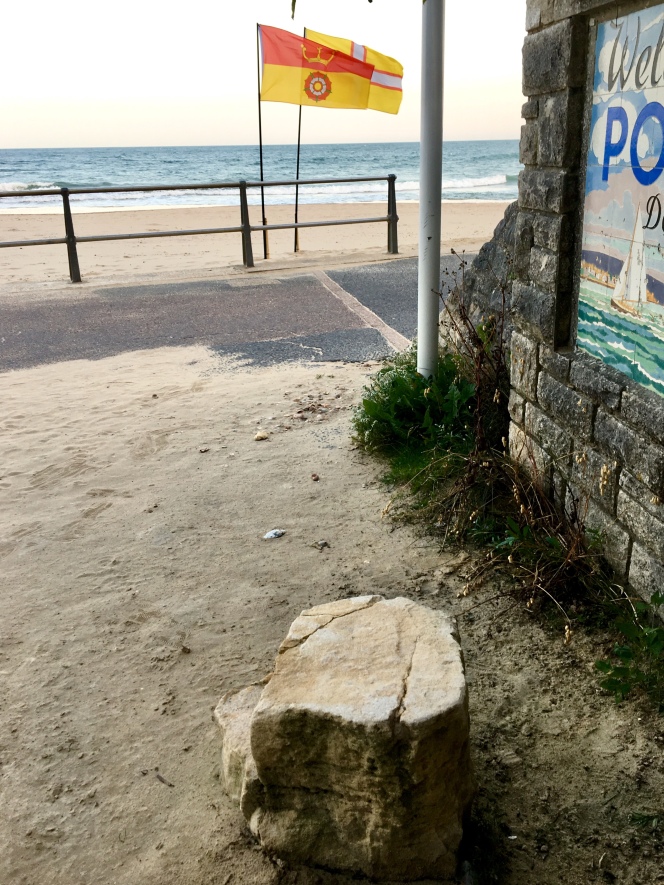 A wholly unofficial “Dorset ensign” has also been produced 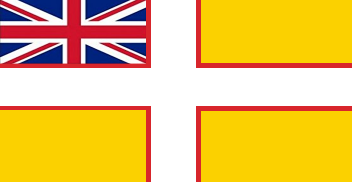 alongside its Devonian counterpart.

The surplus funds, originally raised to produce flags and promote the cause, were donated to the local helicopter ambulance service shortly after the flag’s registration. 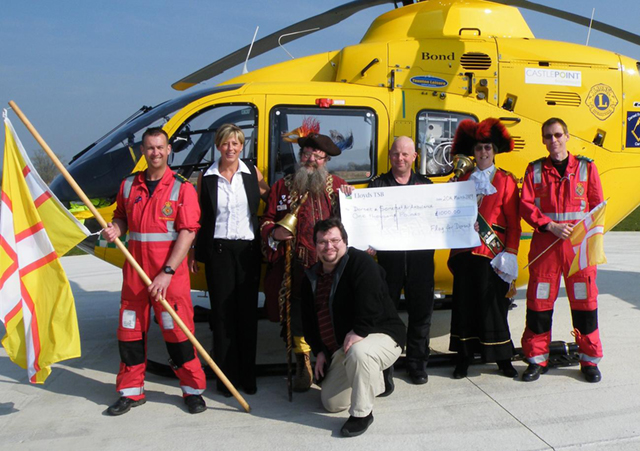