Middlesex Day is the 16th of May, the date of the Battle of Albuerra 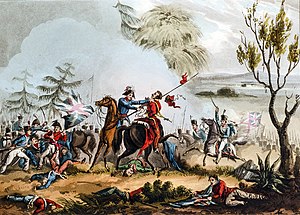 in which the Middlesex Regiment,

ever since, known as the “Die-hards”, distinguished themselves. The Middlesex Regiment was part of the British forces fighting under the Duke of Wellington

, entrusted to stop the advance of the French into Portugal to avoid being trapped at the village of Albuhera on the Spanish/Portuguese border. The commanding officer of the young Middlesaxon fighters reportedly yelled at the height of battle “Die hard my men , die hard”.The Middlesex men fought ferociously to keep the seemingly overwhelming French forces at bay and the regiment consequently became known as “the Diehards”.

The choice of this date was made as a result of a 1988 poll by the Friends of the County of Middlesex.