a long established tradition. Supposedly of Irish origin and sometimes identified as the Irish Saint Ciarán of Saigir who founded the monastery at Seir-Kieran in County Offaly, the saint is associated with a number of legends and stories. It is said that he was rolled over the edge of an Irish cliff whilst tied to a mill stone; plummeting to a stormy sea, which calmed upon his entry into the water, he floated safely away to land on the beach at Perranzabuloe

where he acquired his first disciples, a badger

In Cornwall he became a hermit, impressing all with his sanctity and austerity and drawing many converts. In time he founded the Abbey of Lanpiran,

where he became abbot. It is also said that Saint Piran rediscovered tin smelting when his black hearthstone was heated and the vein of white tin ore contained within it

melted and rose to the top! An occurrence said to be the origin of Cornwall’s flag, the Cross of Saint Peran. This is much in evidence across the territory

on March 5th. The largest St Piran’s Day event is the march across the dunes 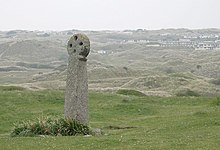 which hundreds of people attend carrying the Cornish Flag. In recent years, a play of the Life of St Piran, in Cornish, has been enacted at the event. Daffodils are also carried and placed at the cross. Daffodils also feature in celebrations in Truro, most likely due to their ‘gold’ colour. Black, white and gold are colours associated with Cornwall due to St Piran’s Flag (black and white), and the Duchy Shield

In 2006 Cornish MP Dan Rogerson asked the government to make 5 March a public holiday in Cornwall to recognise celebrations for St Piran’s Day.