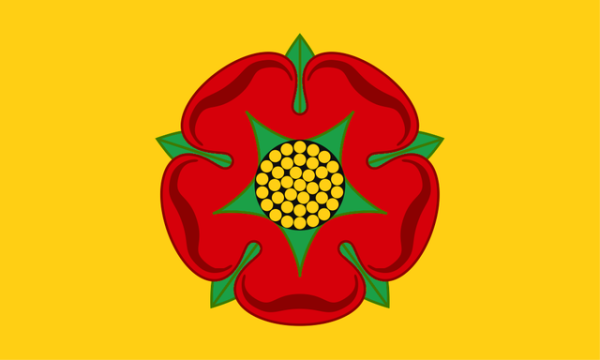 Lancashire’s warm and sunny flag was registered in 2008. It features the county’s traditional red rose

with which it has long been associated. A rose had first been used as a royal badge by Henry III (reigned 1216 – 1272) , who adopted his golden rose from his wife, Eleanor of Provence. This royal badge was then used by the four subsequent monarchs but Henry’s son Edmund (Crouchback) (1245-1296) the first Duke of Lancaster, distinguished his own badge by making the rose red. His descendants, the Dukes of Lancaster, used the badge as an emblem of the house of Lancaster. The specific variety or species of rose depicted is generally held to be the “Rosa Gallica Officinalis”, 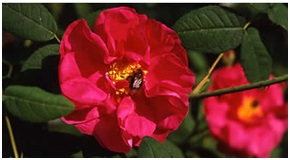 possibly the first cultivated rose. There are conflicting opinions regarding the prominence of the red rose during the period of the civil war, subsequently named “The Wars of The Roses”. Although a badge of the House of Lancaster it is conceivable that it came to prominence only with the victory of Henry VII (Tudor) at the battle of Bosworth in 1485, in response to the white rose badge used by the rival House of York. The promulgation of this Lancastrian badge allowed Henry Tudor to symbolise the restoration of peace and unity by creating the combined red and white, Tudor rose, that came to symbolise England as a whole and to bask in the reflected glories of both York and Lancaster – each a cadet branch of the royal Plantagenet House. The floral union also reflected his personal union in marriage, with Elizabeth of York and the cessation of hostilities between these rival branches of the royal dynasty. Whether this deft, political use of emblems was of Henry VII’s own devising or that of some insightful herald is unknown. The association of the red rose of the House of Lancaster with the county of Lancashire seems to have developed retrospectively, thereafter, in consequence of its use as an element in the much featured Tudor symbol.

In the nineteenth century the red rose appeared as the badge, or on the military banners, of some county militia regiments including the Royal Lancashire Militia 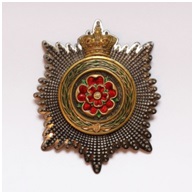 A red rose also reportedly featured on the regimental colours of Blackburn Hundred Higher Division Local Militia, and Trafford House and Hulme Local Militia. Notably however, in this era of the early nineteenth century, other militia units from Blackburn, Leyland and Oldham for example bore no rose on their insignia. Similarly the red rose makes no appearance on the arms of the county’s older or larger towns and cities, for example;

and Darwen, Salford and Rochdale

which contrast with the arms of urban areas awarded in later years, which regularly include roses, e.g.

indicating a developing association between the County of Lancaster and the red rose emblem of the House of Lancaster.

Architectural features incorporating the red rose also appeared at this time. A cobblestone mosaic depicts the red rose of the county in Williamson Park, Lancaster. The building and grounds date from the early twentieth century 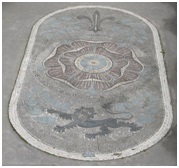 Another cobbled mosaic of the red rose can be seen outside Manchester Town Hall, completed in 1877

demonstrating that the symbol had become firmly established as the county emblem. This was followed at the start of the twentieth century with the award to the local county council, which had been established in 1889, of an official coat of arms. The firm association of the county and the red rose by this time is evident in the pattern adopted, which boldly displays three red roses of the House of Lancaster. 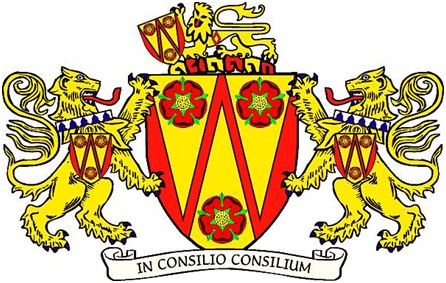 The main arms were officially granted on August 31, 1903, the supporters were granted on October 26, 1903. The various other elements that make up the arms, for example the colours, are derived from the arms of the Ferrers family, earls of Derby

who held the land between the rivers Ribble and Mersey in the thirteenth century before the Earldom (later Duchy) of Lancaster was created. However, the rather distinctive heraldic “piles”, the three triangles on which the roses sit, seem to have been an entirely novel creation. Occasionally a banner of these arms has been seen over council buildings in the county 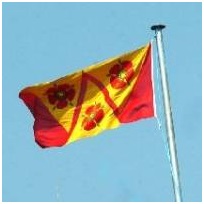 A decade later, during World War 1, (1914 -1918) the red rose had become entrenched as the county symbol. The 55th (West Lancashire) Territorial Division wore it on their shoulder flashes as their Divisional Sign and had the motto “They win or die, who wear the Rose of Lancaster” 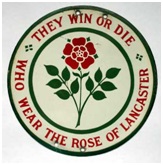 At some stage in the late twentieth century the red rose began to appear in flag form,

against a white cloth, possibly in the early to mid 1980s but the precise details regarding the inception of this design have seemingly disappeared with the passing years.

Its initial appearance seems not to have been very widespread however, for in the 1990s William Crampton and Michael Faul of the Flag Institute were considering other potential designs for a flag for the county. William Crampton conceived several designs shown below, clockwise from top left; a white flag with red cross between four roses, one in each corner; a blue-white-blue horizontal triband with a red rose on the white stripe, shifted towards the hoist; a white flag with a blue border and a central red rose; a white flag with a red cross and a red rose in the first quarter. 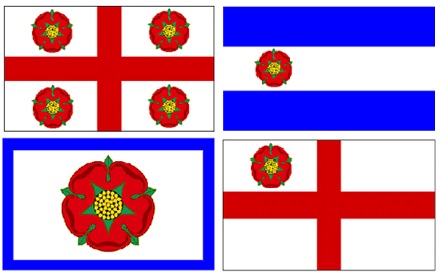 The blue and white that features in some of these designs are the recognised livery colours of the House of Lancaster.

Over the next decade however, the burgeoning popularity in the county, of the red rose on a white background made these alternatives unnecessary. Several years after the inception of the Flag Registry moves were made by a local interest and pressure group named the Friends of Real Lancashire (F.O.R.L), to see this design

registered. The organisation had been formed to campaign for recognition of the county’s true boundaries 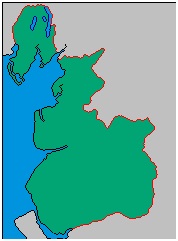 rather than the administrative area named Lancashire. Registration of the white flag with the red rose proved unachievable however, because one of the rules that applies to the registry is that it cannot have two flags of the same design representing different entities. In this case the shield in the arms of the Scottish town of Montrose was also white with a red rose and a banner formed of this design produced an identical flag. It was therefore necessary to consider an alternative design for Lancashire’s flag. Inspiration was found in the red and yellow arms

of the county council. Graham Bartram of the Flag Institute applied these two principal or livery colours to the existing white flag with red rose, to produce a version in yellow

and this colour scheme had in fact been deployed previously by the Lancashire Brigade, between 1958 and 1968, as a uniform patch

Markedly, exactly the same arrangement of a red Lancashire rose on a golden field, had also featured on the former coat of arms of Bolton Council 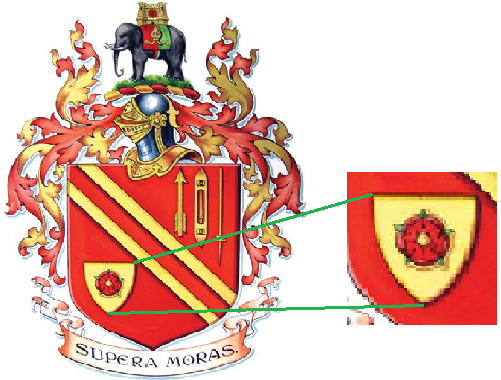 appearing as an escutcheon or inescutcheon  (depiction of a small shield on a larger one) in the lower left area of the shield, symbolising the town’s Lancashire location and the same pattern had also been deployed as part of the arms of the Diocese of Blackburn 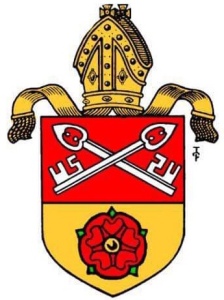 There were, therefore, local precedents for the arrangement duly registered as the county flag.

The new flag was registered on November 20 2008 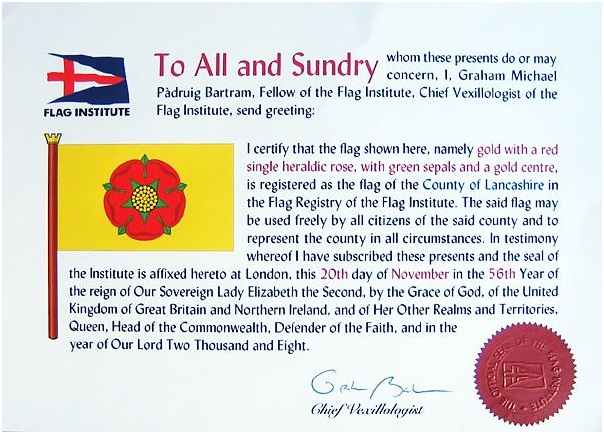 , at which time Chris Dawson, chairman of F.O.R.L referred to the flag’s derivation from the council’s arms “The Lancashire coat of arms is yellow and red, so the yellow seemed to be an appropriate colour. It seems to have been favourably accepted by everyone who has seen it. I think it will show up better than the white, which often clashes against the clouds. We’d like to see everybody flying the Lancashire flag. We want to see it on public buildings.”

As Graham Bartram commented at the time of registration “…it’s quite a striking flag.”

and now regularly flies or is displayed, around the county

and appears on tee-shirts, caps and ties,

The flag has also been displayed at the Glastonbury music festival 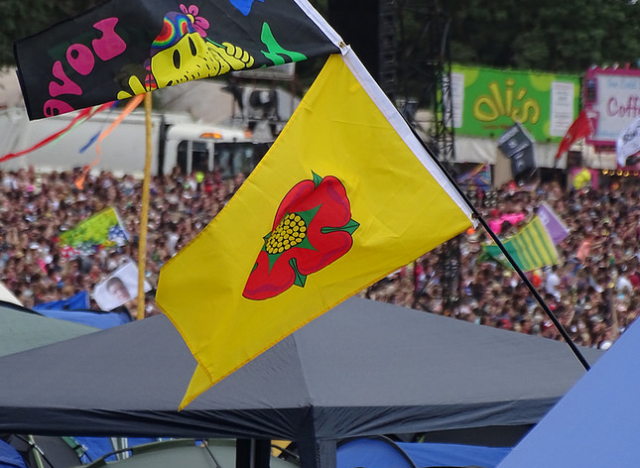 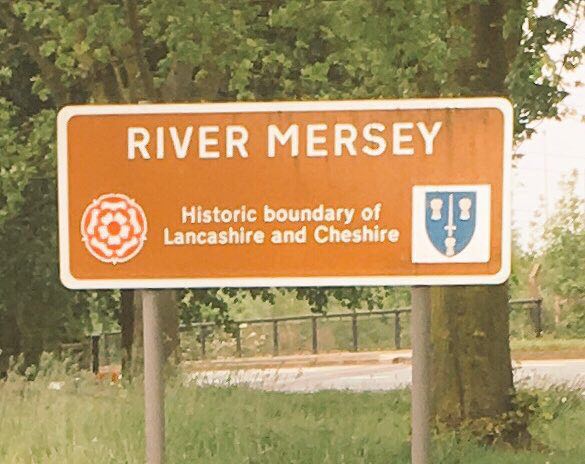 marking their mutual boundary at the River Mersey.

With thanks to Ian Sumner, Flag Institute librarian, for additional research and information. 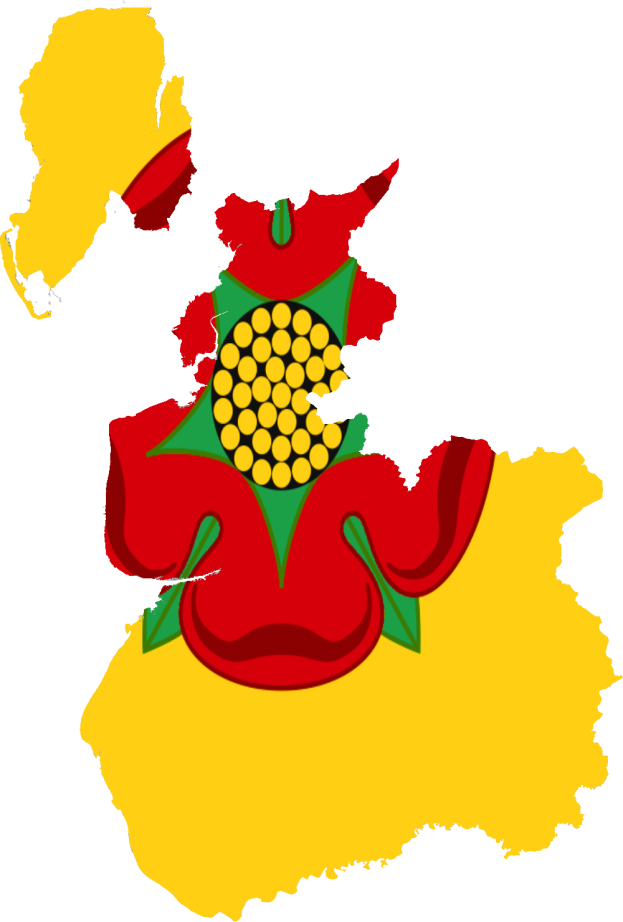