The flag of Cheshire was registered by the Flag Institute on April 10th 2013, following a request by the Historic Counties Trust and after receipt of expressions of support for its registration from a number of countywide bodies. The three gold wheatsheaves, known heraldically as garbs, on a blue background, have been associated with either the Earldom of Cheshire, the county of Cheshire or its county town, Chester, for several centuries. The Earldom of Cheshire was originally created by William 1st  when the Norman regime, making examples of the local nobility, confiscated the property of Earl Edwin of Mercia and other local landowners as part of measures taken to overcome the entrenched resistance of the Anglo-Saxon population. The first earl, Hugh d’Avranches, ruled virtually autonomously in William’s name and with his full authority. By the late twelfth century the earls had established a position of power as quasi-princely rulers of Cheshire which led to the later designation of the “County Palatine of Chester”, indicating that the territory enjoyed a degree of autonomy distinct from other shires, “palatine” meaning “from the palace” and referring to the authority so derived by the rulers.

Earl Ranulph de Blondeville, the sixth Earl, was the first to use the three garbs on blue,

in the twelfth century, they were then deployed, according to the Cheshire Heraldry Society, as the city arms of Chester in 1560; however, the arms

which appear on Georg Braun’s 1581 map of the city, 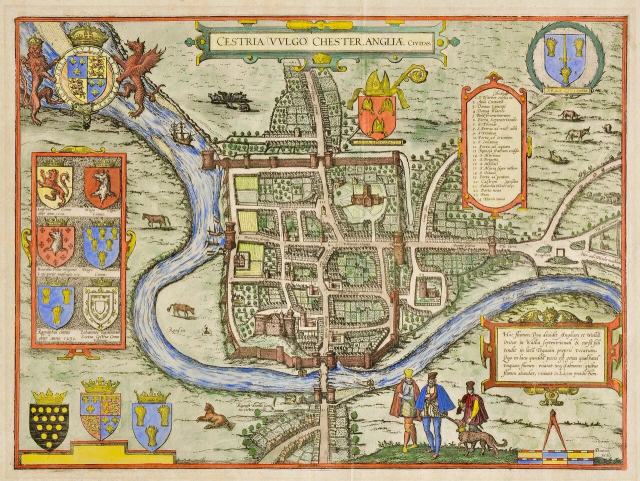 have clearly acquired the additional charge of a sword, between the three garbs, by this date. The addition of the sword amongst the garbs is held to reflect the assertion that the Earl of Chester held the lands of the County Palatinate “as freely by his sword as the King of England held by his crown” although it’s not precisely clear when or under what circumstance, this addition was effected. 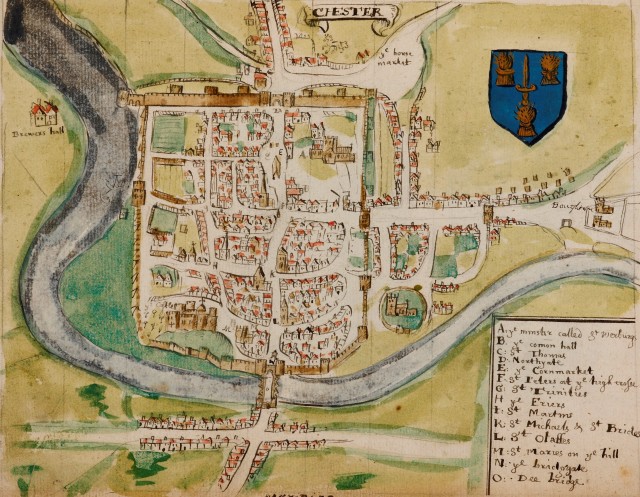 on his aerial view of the city

also from 1585. The plain de Blondeville arms, without the sword,

and appear amongst a series of local arms, down the left side

of John Speed’s map of the county,

As with the earlier maps, the version of the arms supplemented with a sword

appears as the arms of Chester, on an inset plan of the city 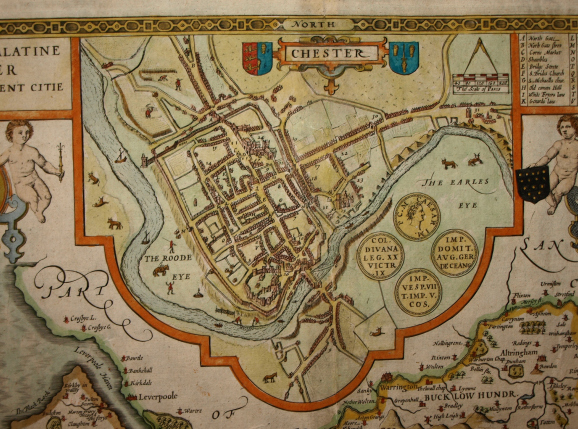 included within the map.

The plain de Blondville arms, without the later sword, appear on this heraldic plate

which may date from the late nineteenth or early twentieth century.

Chester was later awarded different arms by Elizabeth I, in 1580, which incorporated the de Blondeville garbs alongside the arms of England.

and as seen above, these also appear on the Speed map.

Cheshire County Council, which inherited the administration of the county after its formation in 1889, was awarded its own arms in 1938

which were identical to those originally appearing as the arms of the city of Chester on the 1581 Georg Braun map. 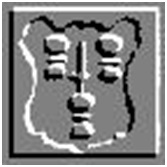 which conceivably may have been the inspiration for the later arms awarded to the county council. The golden garbs and sword on blue, also adorn the Eastgate Bridge in the city, 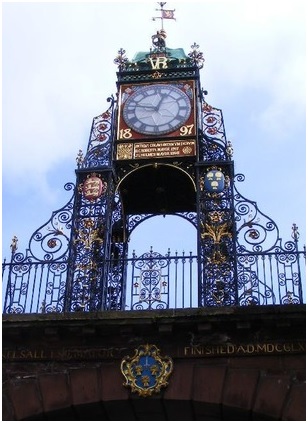 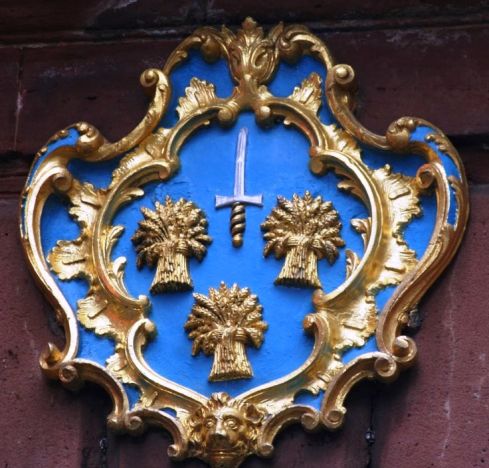 further indicating a degree of overlap in the use of these arms by both city and county bodies. The original garbs of Ranulph de Blondeville are also present.

Two further designs were used by the Assay office; between 1701 and 1779 it used the arms of the city of Chester which had been awarded by Elizabeth 1st

and from 1779 until 1961, when the office closed, it again reverted to the three garbs and sword device, in a slightly modified form – by the last few decades of this era of course, the same arrangement had been taken up by the county council.

A wheatsheaf has since become a general county emblem, and can be seen singularly, as a trio, or in combination with the sword in the insignia of many Cheshire bodies including; 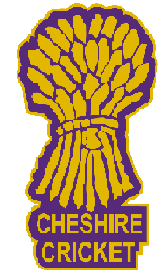 and in the 21st century, the traditional county emblem was adapted by the newly formed “Search And Rescue” Cheshire service

The design is present on this twentieth century car badge 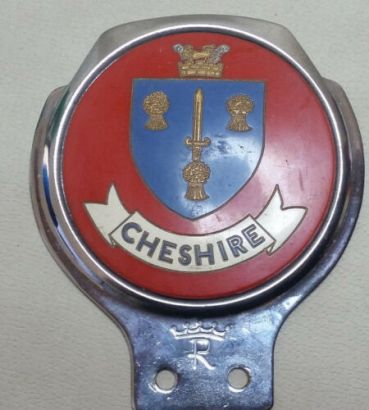 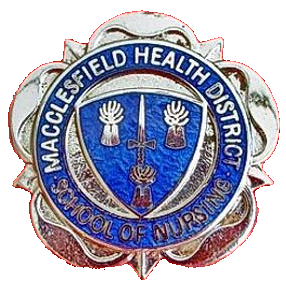 and has been used as the club badge by Stockport County FC. 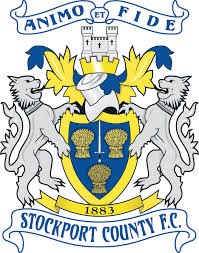 who on April 8th 2011 held a “Cheshire Flag Day” to celebrate the club’s roots in the historic county of Cheshire.

One or more wheat sheaves also appear in the arms of many towns in the county; including; 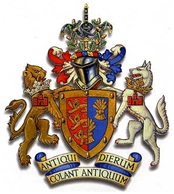 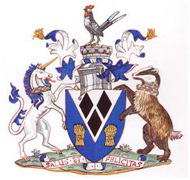 as a small sample.

In many counties the arms of the council are excessively intricate and may not be particularly representative of the county itself – Dorset council’s three red lions of England and French fleur de lis, are such an example. For Cheshire however, the arms borne by the council have a very long standing association with and usage in, the county, there could be no other more appropriate flag for it than a banner formed of these arms. The Cheshire County Council itself was disbanded in 2009 but even prior to this and as with several other county councils, one version of a banner of its arms was made commercially available as the county flag of Cheshire, albeit without legal sanction! This actually flew at the Eland House headquarters of the Department for Communities and Local Government in 2011 to represent the county, clearly demonstrating the general consensus of the design’s de facto status as the county flag.

Indeed the design had been earlier incorporated by William Crampton – founder of the Flag Institute, doyen of modern British vexillology and native Cestrian – in the canton of his early 1970s design for the Cheshire Fire Brigade Flag.

In light of this overwhelming evidence, support for registration of the design of three gold garbs and sword on a blue background, as the county flag, was sought and received from the following local county organisations;

and the flag was duly registered by the Flag Institute, formally acknowledging the de facto situation. The flag can now be found proudly flown by the county’s residents

and is used by county teams in competition, such as the Cheshire darts team

, who also uses the design from the flag as a badge, appearing on the team kit. It is seen here

attached to a yacht on the Greek coast, here

at the Dorset Steam Fair and here 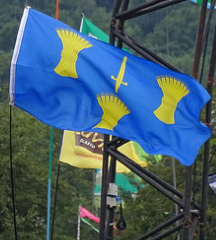 and appeared in a humorous, variant form! 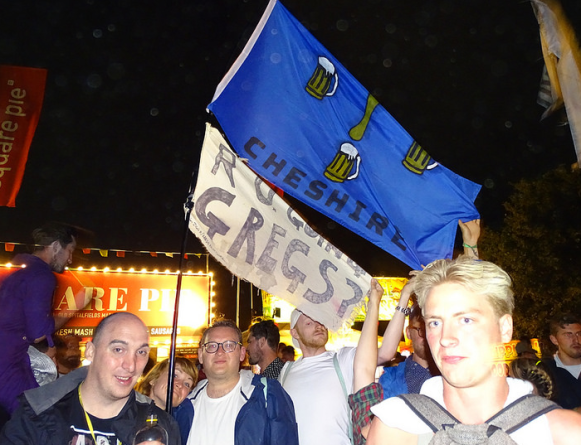 marking their mutual boundary at the River Mersey. 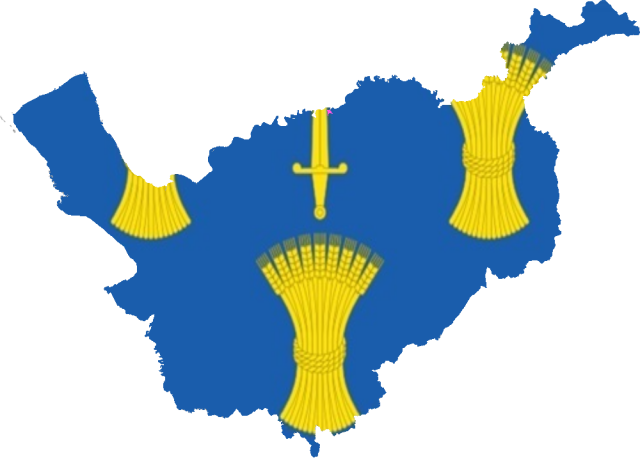