The Mercian flag was added to the Flag Registry in November 2014, as the traditional emblem of the former Anglo-Saxon kingdom and modern region. The earliest reference to the design is to be found in John Speed’s 1610/11 atlas of Great Britain (“The Theatre of the Empire of Great Britaine”) where it appears on the title page of the work

and on a map of the seven kingdoms that make up the Anglo-Saxon heptarchy.

albeit often as a white cross, other versions of the work depict it as an undeniable gold or yellow cross

and this is the colour scheme that is considered to be the intended depiction.

and also appears there in quasi flag or banner form

may have been a chart of heraldic designs dating from the reign of Henry III (1216-1272) designated as Ms (Manuscript) L.14 by the College of Arms, where the document is held. This source is cited by George Collen in his 1833 work “Britannia Saxonica”, which includes an illustration from the manuscript

also seen below in a coloured version 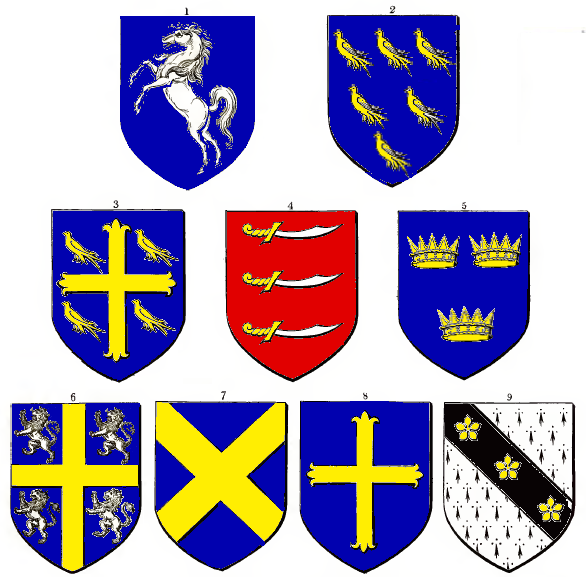 featuring an array of devices attributed to the kingdoms of the Anglo/Saxon heptarchy , which of course predates the rise of formal heraldry by centuries. Amongst the shields presented is one that is blue (azure) upon which is a gold/yellow saltire (or), assigned to Mercia

Collen names both Speed’s ‘Theatre’ and Churchill’s, ‘Divi Britannici’ (see below) alongside this work

solidifying the notion that all three presented the same information regarding an apparent categorisation of arms for the Anglo-Saxon realms, during the reign of Henry III. However, historian James Lloyd has pointed out that “manuscript L. 14 is in fact a late-sixteenth or early-seventeenth-century production, partly original and partly copied from older records..” but not from any source containing attributed Anglo-Saxon arms.

Mediaeval heralds typically attributed coats of arms to people and places from the pre-heraldic era, perhaps the pattern assigned to Mercia was based on a local tradition, which Speed duly followed. These same arms were also attributed to the saint, Alban (the “Cross of Saint Alban”),

a Roman era native of what would later become Mercia. The diagonal cross or saltire (derived from Middle French saultoir (stirrup), possibly owing to the shape of the triangular areas in the design) is generally held to refer to the fact that he was the first British Christian martyr and so entitled to bear a cross of martyrdom; however, as he was not crucified but beheaded, the cross is in an unusual diagonal form. Plausibly the “local tradition” on which Mercia’s attributed arms were based, derived from the fate of Saint Alban – the arms ascribed to the Mercian kingdom alluding to the fate of the renowned local saint. As a chapel of Saint Andrew was attached to the Abbey of Saint Alban, it has also been mooted that Saint Alban’s symbol was influenced by the symbol of St Andrew, a white, diagonal cross, on blue

However, it is not categorically clear whether the Dark Age Kingdom was attributed these arms first, which then became associated with the saint, or vice versa. Whatever the precise sequence and configuration, it is evident that Mercia, Saint Alban and the gold saltire on a blue field, have a long established linkage and usage.

It is recorded that King Offa of Mercia founded St. Alban’s abbey on the site of his martyrdom and the mediaeval town of Saint Albans grew up around it, named for the saint. In his “The Romance of Heraldry” G.W Scott-Giles writes on page 255 “Blue, a gold saltire…”, “…arms ascribed by the mediaeval heralds to the Kingdom of Mercia, appear to have been adopted by Saint Albans in consequence of the foundation, in 793, of the monastery to the memory of Saint Alban by Offa, King of Mercia.” which strongly suggests that the arms were defined primarily as those of the kingdom and of the saint and town, by association. This surmise seems substantiated by the date of the first record of the gold saltire on blue field

as the arms of St. Albans town, 1634, some twenty years after their documentation as the arms of Mercia by John Speed. They are depicted above in their simple form, the plain shield, left and in the full achievement, with supporters, crest and other adornments, right. A differenced version of the pattern

is also used by the Bishopric of Saint Albans.

by Sir Winston Churchill (direct ancestor of the famous twentieth century one), published in 1675.

Other towns in historic Mercia include the gold saltire in their civic arms, including Tamworth, the historic capital of the Anglo-Saxon kingdom; 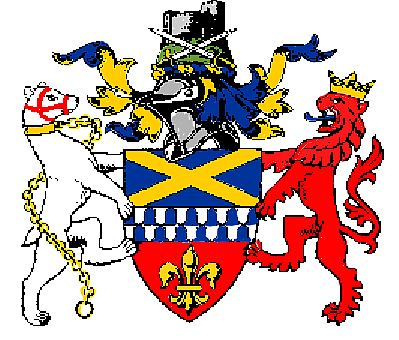 Blaby, which includes the gold saltire in its crest and a saltire in a different hue on its shield 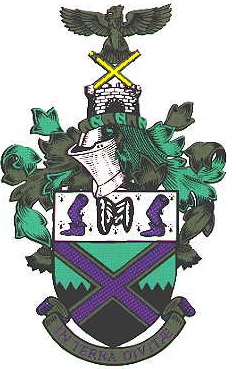 and Leek, whose shield is also blue and bears a gold diagonal cross

In the modern era the gold saltire on blue design has tended to be seen predominantly as representing the town of Saint Albans but the seemingly older tradition of their usage, as the arms of Mercia has not been forgotten and indeed it appears to be an ever popular trend. The midlands town of Tamworth was once the capital of the Anglo-Saxon kingdom of Mercia and the town’s castle today, proudly hoists a flag based on the historic Mercian arms, namely a gold saltire on blue – photo courtesy of Simon Hayward.

The castle’s website explains , “Mercian flag, Tamworth functioned as the Capital of this ancient Saxon kingdom from 527-918

In recent years the town itself has reasserted its glorious past. Inspired by the discovery of a vast hoard of Anglo-Saxon treasure just ten miles away, new signs, bearing the flag of Mercia and a symbolic representation of an Anglo-Saxon warrior, celebrate Tamworth’s heritage as the ancient capital of Mercia

In 2009, whilst the Staffordshire Hoard of Anglo-Saxon treasure was on display in the city, the Mercian flag also flew outside the Birmingham Council House 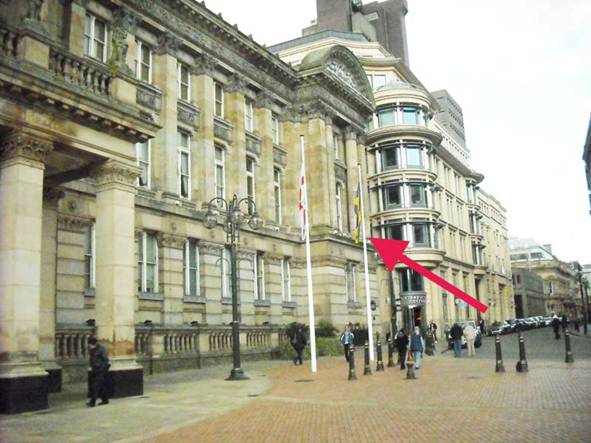 and is used by various groups asserting the distinct character and identity of the region,

(this incorporates the double headed eagle arms ascribed to the earl, Leofric of Mercia)

Acknowledging this continued recognition and usage of the gold saltire on blue as the natural flag of the Mercia region, the Flag Institute duly registered the design, a fitting development for this long associated, traditional, Mercian emblem. In the majority of cases, especially where actual physical flags were flown, such as at Tamworth or in Birmingham, the flags flown for Mercia were demonstrably of a dark blue shade and accordingly, the dilemma regarding who had prior claim to the pattern of a gold saltire against a blue background, Mercia or Saint Albans, was resolved by assigning a darker shade of blue to the background of the Mercia flag 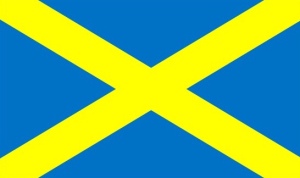 although such a design has not actually been registered as the town’s flag by the Flag Institute and in practice, this useful fine distinction is not evident; flags flown in the town being uniformly identical to the darker design registered for the wider region.

with an embellished, golden saltire on blue, that is also deployed as a flag