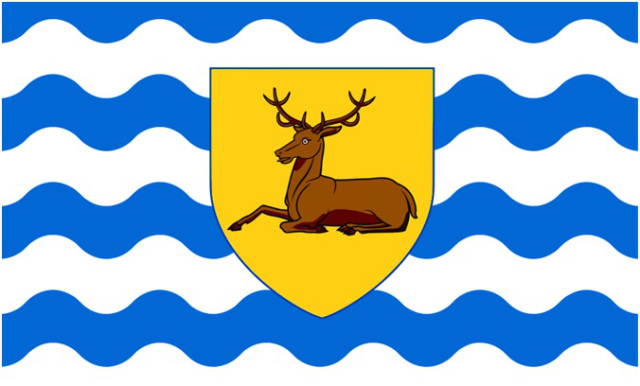 Hertfordshire’s flag was registered on 19th November 2008. The flag is a banner of arms of the County Council

released for public use, following enquiries from members of the Flag Institute. In 2004 the organisers of the Hertfordshire county show arranged a “Parade of Flags” event as part of the proceedings. Reportedly “flags” of local parish councils were displayed as part of the parade but the event organiser Mr Richard Walduck expressed some surprise that the county itself appeared not to have a flag; “Mr Walduck said

“I am absolutely amazed that Hertfordshire does not have its own flag. We would welcome ideas and support from Hertfordshire residents and businesses to help design and produce a Hertfordshire flag to lead the Parade of Flags event at next year’s Herts County Show.”

Unfortunately this initial enthusiasm failed to produce a flag for the county; by 2008 with no flag appearing, Flag Institute member Jason Saber contacted fellow FI members including a resident of the county, to see if the situation might be remedied. A few ideas were produced and contact made with the local council, as a result of which the body decided that the preferred option would be to release its banner of arms, seen here

flying at the council’s County Hall headquarters in Hertford, to the public, for use as the county flag.

Curiously, before this intervention Hertfordshire was one of the few counties for whom a banner of the council’s arms was not commercially available as the county flag – it had been strangely overlooked by the flag manufacturers! Following the registration the flag is now generally available and appears on various products

The arms from which the flag is formed were awarded to the council on June 3rd 1925. The blue and white waves are held to represent the many rivers of the county and the shield (escutcheon) bearing a hart (deer) is taken from the arms of the Borough of Hertford

the county town. This is a punning reference to the name of the town and shire. The gold colour of the shield was likely chosen as the providing the best visibility.

A representation of a hart or deer is used by various different county bodies often as a stylised logo;

from left to right, the badges of the Hertfordshire Football Association (two versions), the county Rugby Union and the Cricket Club in both green and white silhouette form and the insignia of the county’s archery team, far right over several arrows. The hart is also present on the badge of the county schools football association

The county’s police (at left below) and fire service (at right) both use the hart, more or less as a silhouette, in their insignia

Hertfordshire’s hart was also incorporated into the emblem of the

Metropolitan Railway, alongside the emblems of Buckinghamshire and Essex and the arms of the City of London.

Upon the registration of the flag the local media reported the action taken by the council. The Welwyn and Hatfield Times of November 25th 2008 quoted county council leader Robert Gordon as saying the move would “help promote Hertfordshire and reinforce our shared sense of identity and civic pride”, adding “Until now, only the county council could lawfully use the flag but this decision will allow communities, organisations and individuals associated with Hertfordshire to use the flag freely.” I hope that people will adopt it as a symbol of their own county and take pride in using it for civic occasions and other events.”

And indeed, the flag was soon flying domestically in the county 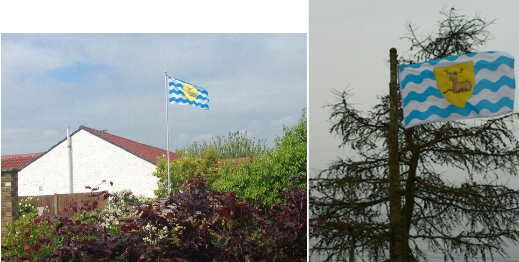 and at the County Show, where the issue of a county flag was first mooted 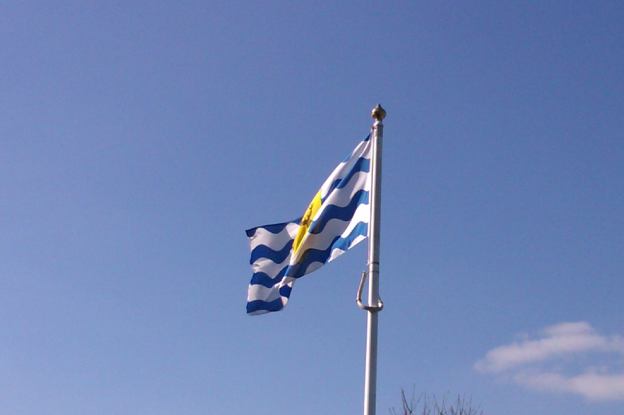 and was raised over Shenley Cricket Club

It was displayed at a campsite

and has made several appearances at Glastonbury