A Flag For Peeblesshire

The proposed flag of the county, also known as Tweeddale, is inspired by the arrangement of three salmon, found on the civic arms of the county town of Peebles

which were granted on December 18, 1894. Peebles was designated as a Royal Burgh around 1153 and had used the three salmon on its civic seal,

an impression of which is known from 1479. The salmon are a celebrated local species which inhabit the River Tweed, upon which the town sits. Their particular depiction, with the middle fish aligned opposite to the upper and lower two, refers to  their spawning practice, where they swim upstream and reflects the local observation that for every one salmon that swims upstream in the River Tweed two will flow down it! The Latin motto on the arms, “Contrando Incrementum” meaning “Increase by swimming against (the stream)” further alluding to the activity of the salmon, highlights the significance of the salmon in local culture. The salmon charges have been shown against a red field for centuries, although there is known precise reason for this. Two of the salmon from the town’s arms also appeared as supporters on the arms awarded to Peebleshire County Council

The piscine trio is frequently found around the town, both on sites

under the jurisdiction of the local authority, including the Merkat Cross,

believed to date from 1320 and also on private and commercial sites, both in precise heraldic form 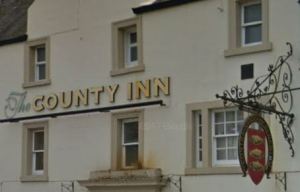 and adapted as company logos

Whilst use of evidently official arms on commercial enterprises is seemingly an illegal practice under the strict rules of Scottish heraldry, it does suggest that the emblem is dear to the hearts of local people and clearly ingrained as part of the local heritage and culture, as evidenced by its use by the town’s local football club

and thus evidently the most appropriate combination to appear on a flag for the county. The symbol is in great evidence during the local “Beltane” celebrations

The decorated houses competition attracted a lot of entries

including deployment in banner form!

Thus the proposed flag, created by Philip Tibbettts, combines the Peebles salmon with a vertical, blue and white, wavy pattern, symbolising the River Tweed that rises and begins its course in the county. As on the popular local depiction, two fish point down and one up, in a graphic representation of the local observation described above. 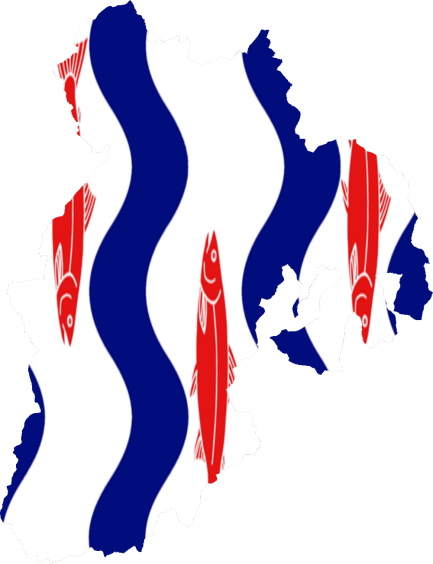