The Isle of Wight flag was registered on January 9th 2009. It was the winning entry in a competition created jointly by the island’s council in the form of the “Isle of Wight Flag Committee” and the local County Press newspaper. The flag was designed by John Graney

The winning design was one of four,

selected by the flag committee from an initial 350 entries, for the public to vote on.

Whilst traditionally a part of the county of Hampshire, as an island entity, obviously separate, the motivation to create a specific flag was typically strong, especially as it is self-administering. The Flag Committee was created in 2007, perhaps inspired by the success of the Devon flag, which launched in 2003. The popularity that that had engendered with visitors, might have encouraged an interest in creating a similarly marketable product. Indeed at the launch of the competition, the editor of the County Press, Alan Marriott, commented “I am delighted that the paper is getting involved in this plan. Hopefully we will find commercial partners who will turn the flag into a range of products, which I believe would be a boost to the tourist identity of the island.”

The flag’s blue and white wavy lines at the base reflect the island’s obvious maritime position while the stylised white diamond shape symbolises the island itself, the notch at the top represents the inlet of the River Medina. No specific explanation seems available to explain the light blue background against which the diamond is placed but it may represent the sky. It is certainly unusual for different shades of the same colour to appear on one flag.

with John Graney holding the flag and Derek Bean, chairman of the Island Flag Committee, at left. John Graney (below centre) received his own flag from County Press editor Alan Marriott (below right) with Derek Bean, again at left.

Derek Bean commented that he was pleased to see the flag starting to appear around the Island.

Before the competition, the island had no definitive flag, its team competed at the International Island Games, for example, under the flag of England, the Saint George’s cross. However, two flags did exist which were described and marketed as the flag of the Isle of Wight. The first of these was an armorial banner 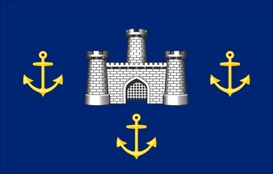 of the arms of the Isle of Wight council

This blue banner of course represents only the council and is not the flag of the Isle of Wight. It is interesting to note that the white horse supporter in the council’s arms is the same as that found in the flag and arms of Kent  recalling the common settlement of both territories from the fifth century onwards by reportedly white horse bearing Jutes.

The other flag was an unequal vertical tricolour of two thinner green stripes and a broader central white stripe.

The origins of this curious flag are unknown however – perhaps it arose as a marketing ploy – it is found in gift shops. This flag has proven quite popular. With the advent of the competition winner this design is now often termed “the rebel flag”! It has been triumphed by island resident Paul Sturgess, implacably opposed to the competition winner which he has described as “looking like a fillet of plaice out of water”. He has argued the case for the tricolor, asserting that it reflects “the true colours of our Island with its green fields and a backbone of pure white chalk”. He also questioned the voting process, “Do the people of the Isle of Wight know the number of votes for the new flag. We have the right to know.“ In the debate surrounding the flag competition another comment came from Toby Hector regarding the evidently undemocratic nature of the island flag committee.

“I had always been a fan of the County Press, but when I heard they’d taken it upon themselves to team up with the unelected ‘Island Flag Committee’ and create a new Island flag I was staggered. How arrogant are these people?!?”

However, despite its popularity this design has no demonstrable long standing, tradition of use and is not a particularly distinctive design. This was alluded to in another comment in the flag debate from Duncan Knifton,

“ I actually like the new blue flag….the diamond shape is automatically seen as the shape of the Isle of Wight…this so called Rebel Green flag has no history behind it…and is only there to annoy people…so I will stick with the blue one thanks…

who goes on to refer in fact, to a third design that had gained some local currency

…IF you want to change it then the St Georges cross with the IOW in the middle would be great…but other than that, sticking with the diamond one..”

He went on to advise that

“…. some of these have been taken to past Island Games and other sporting events where the Island has been represented…”

“..our belief was that it should be as simple as possible and easily recognised…”

; it is seen below

amongst the flags of other competing teams, at the 2011 competition held on the island and here in a domestic setting 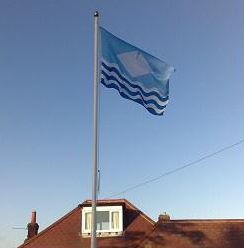 As County Press Editor Alan Marriot entertained, the island’s registered flag has been fashioned into a range of products

and it is interesting to note that in addition to its arms and armorial banner, the island’s council uses a logo, in various realisations, that closely resembles the islands registered flag

The flag has also been displayed by serving members of the armed forces from the island. Here it is seen at an air base with Flt Lt Gary Lewis on an RAF Tornado 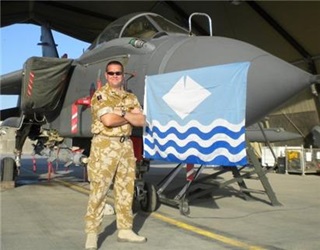 and here it is held by brothers Chris and Jay Bartlett, also in Afghanistan 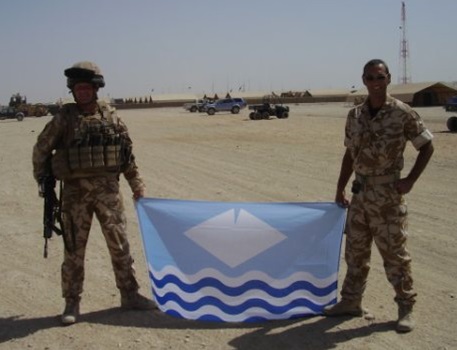