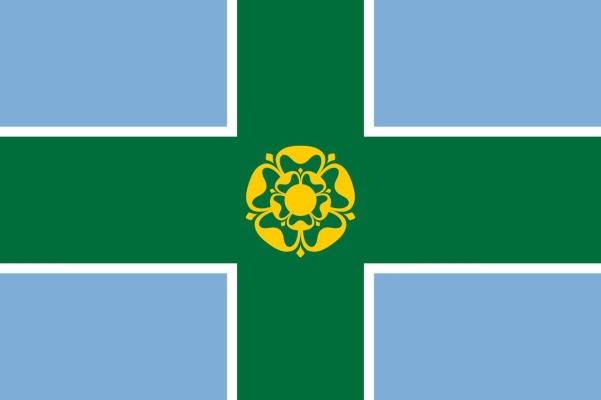 The flag of Derbyshire was registered on 16th September 2008. The flag was designed by Martin Enright of Derby and was the winning entry in a competition to design a flag for the county, organised by BBC Radio presenter and evident flag enthusiast Andy Whittaker, seen here 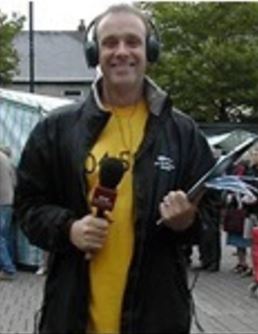 at Ripley Market, on 22nd September 2006, where a small crowd had gathered for a first glimpse of the design.  Jeremy Smith, one of Andy Whittaker’s listeners, having seen the widespread use of Saint Piran’s flag in Cornwall and the pride it conveyed that people had for their county, enquired about a comparable symbol in Derbyshire. There was no such flag and so a campaign was launched to create and adopt one. With evident support for the idea from his county audience, the BBC presenter secured the assistance of the Flag Institute. A number of submissions were received which were whittled down to a shortlist of three by a specially convened panel. The process involved lots of feedback from people outlining what they hoped to see in a county flag which led to the development of three contenders, after several ideas had been merged and perfected.

The winning design features a green cross on a blue background. Blue (presumably light blue) is frequently described as one of the traditional colours of the county, the county cricket team uses blue for for one-day and 20/20 competitions 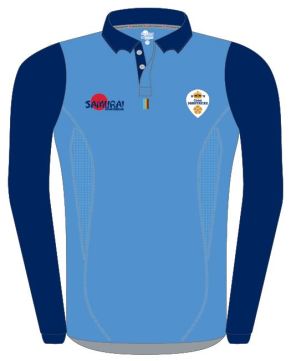 and it represents the county’s rivers and reservoirs. The green symbolises Derbyshire’s lush verdant countryside. The cross indicates Derbyshire’s geography at the centre of the country. At the centre of the cross is a Tudor rose, used as an emblem of Derbyshire since the fifteenth century. The rose is coloured gold as it appears on the badge of the county’s cricket club. It symbolises quality and differentiates it from the emblems of Yorkshire and Lancashire. A Tudor rose appears in the arms of the county council 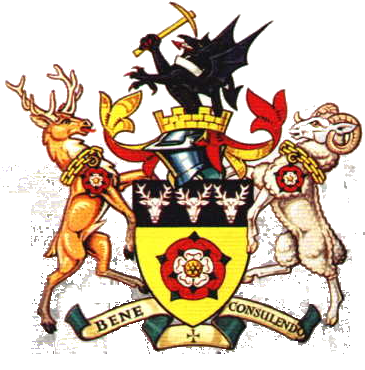 the badge of Derbyshire police 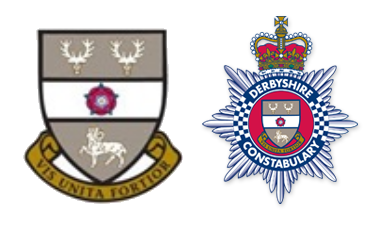 and the original inspiration for the gold rose in the flag, the Derbyshire Cricket Club badge

Another theme which had appeared on a number of the submissions to the county flag competition was a stag’s head. This symbol reached back to Viking times and the foundation of the county town Derby, founded by ninth century Danish invaders who named their first settlement, Derby, for the wild deer that were so abundant in the area – the ending “by” being Danish for village, found also in such names as Grimsby and Kirby/Kirkby.  Three white stags heads on a black shield 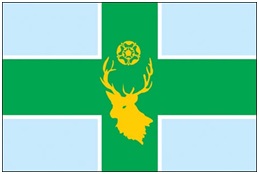 included both a stag’s head and a rose, based on the cricket club badge, both in gold. At the feedback stage this had proven popular but generated  an overall impression that the design would look better with either the rose or the deer but not both. Ultimately the rose was felt to be most striking.

The other two flags in the shortlist were a design inspired by an illustration received from ten year old Daniel Hoskins  from Bakewell, a vertical tricolour of green, blue and green 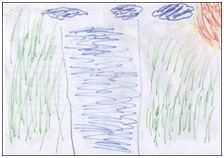 to stand for the verdant countryside and the county’s waterways. The vertical stripes on this flag, stood out from amongst the submissions and at the shortlist stage the stag symbol from Martin Enright’s proposal, that had also appeared on a number of the other entries received, was added to this design

which had proven popular at the feedback stage but was refashioned for the shortlist. The colour of the Tudor rose was corrected to red with a white centre and was slightly reduced in size; the green colour was also darkened as it was felt that the colour would be better in a more conventional shade.  The blue and green colours were a popular choice and carried the same significance in this design as with the others.

The three shortlisted designs were put to a public vote via the BBC Derby website.

Thousands of people reportedly voted in the poll with the winning design reportedly pulling clear of the other two with a clear majority. The new flag of Derbyshire was launched at 8am Friday, 22nd September 2006 BBC Radio Derby’s Andy Whittaker is seen here proudly displaying the new Derbyshire flag 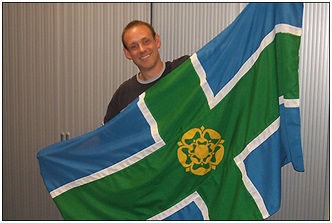 Ceremonies to mark the first raising of the flag were held simultaneously at various locations around the county, including, Ripley, Ashbourne, Buxton and Derby

Here the flag is raised over the tourist information centre in Ripley. 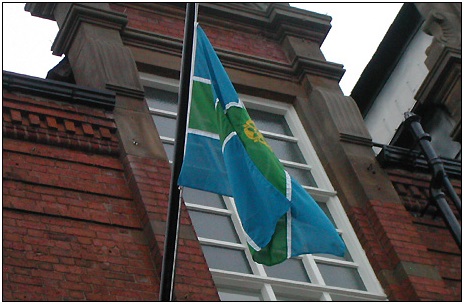 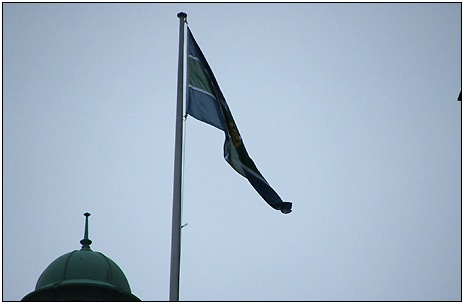 The flag is displayed here at Ashbourne Town Hall

And flies here at the top of Derby Cathderal 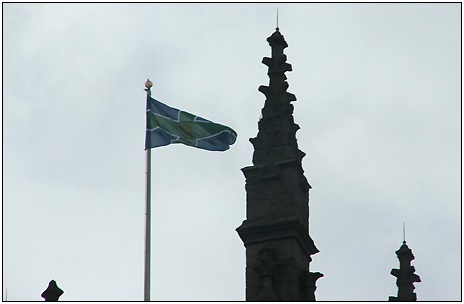 A third theme that had featured on submitted designs was a Derby ram. Sheep have been in the locality since the New Stone Age and were the foundation of local farming and cloth and leather industries on which the county’s towns were based. The county town of Derby has been associated with a ram for several centuries; “The Derby Ram” is a traditional folk song about a huge ram which is depicted as a sculpture 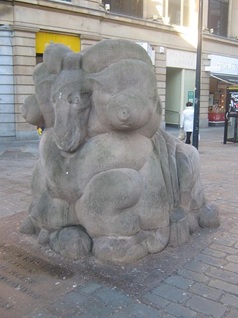 in the town. A ram was also adopted as the county’s regimental mascot in 1865, a tradition which continues to this day 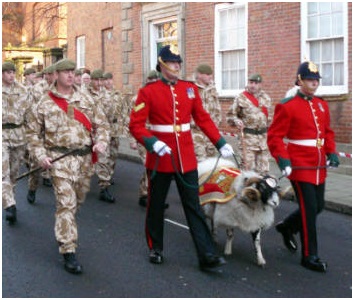 Similarly, the football team, Derby County F.C. which began life as an offshoot of the county cricket team, adopted its nickname of “The Rams” as a tribute to the county regiment and sports a ram as their badge. A ram had initially been used by the cricket club. The football club has sported several versions of its badge. In 1924 its first badge 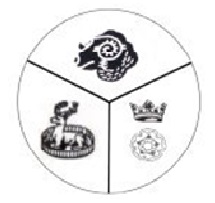 included all three symbols that have become associated with the county, ram, stag and rose. The badge later came to feature the ram alone, corresponding with the club’s nickname, which over the years has appeared in a wide variety of depictions, of which this is a small selection

The badge of the county fire service 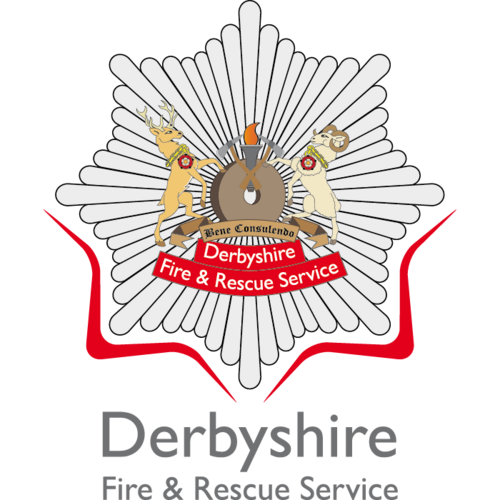 Submissions to the flag competition bearing a ram included the following, the last of which is a stylised abstract depiction.

A stag’s head was also common

and is included here with the county’s Tudor rose badge

The Tudor rose was also on this entry

And all three acknowledged county motifs were included on this idea

Prior to the creation of the flag, the county council’s armorial banner 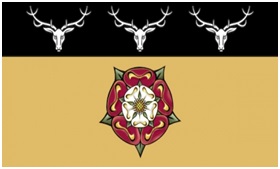 was not widely available commercially but could be found in some outlets. It is of course not the county flag and represents only Derbyshire County Council as the armigers or holders of the arms 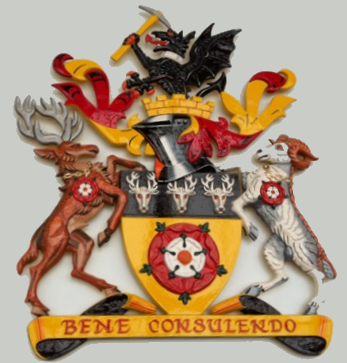 from which the banner is formed.

Since its registration the Derbyshire flag

has been taken up enthusiastically by the county’s residents and flies widely across the county. 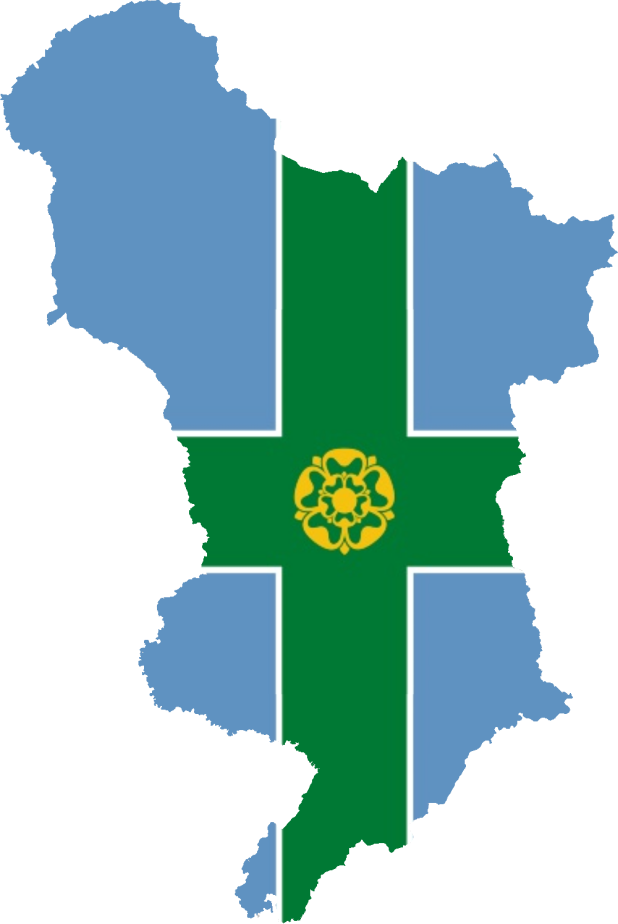