Nottinghamshire’s flag was registered on May 20th 2011. It was the winning design in a competition to choose a flag for the county, organised by BBC Radio Nottingham presenter Andy Whittaker, seen here with the newly revealed county flag

The presenter had previously successfully overseen a similar competition in the neighbouring county of Derbyshire. As with his previous venture the competition was initiated by suggestions from his audience, in this case Jane Bealby and Mike Gaunt who independently contacted the presenter asserting that the county needed a flag for the Nottinghamshire public to fly. Andy Whittaker’s previous success may have encouraged the idea. The response to the suggestion was overwhelmingly positive and contact was duly made with the Flag Institute. A panel of judges was formed, which included Alex Farquharson, the director of city art centre Nottingham Contemporary, the Flag Institute’s Michael Faul, card designer Rachel Church, local businessman Mich Stevenson, graphic designers Jason Holroyd and Simon Dun and the two listeners whose contact prompted the competition, Jane Bealby and Mike Gaunt.

The panel assessed all the drawings, ideas and feedback sent to BBC Radio Nottingham to come up with the final designs. Most of the feedback received, indicated that the flag should feature a prominent symbol of the county. The most popular symbols were the figure of local legend Robin Hood and oak leaves. As can be seen below, crosses and arrows also featured prominently.

From a large number of submissions,

the panel delivered three for a final shortlist

by combining elements from the various ideas submitted.

Thousands reportedly voted in an online poll, resulting in the choice of the third design above, the white edged red cross on green, bearing a green archer on a white shield (inescutchon) as the flag of the county.

and the green background signifies the green fields

that the county is famous for. The idea of placing Robin on a shield was a popular one and has echoes of Nottinghamshire’s industrial heritage as it was used on the former Home Ales logo

The flag was raised on 24th May 2011 at ceremonies across the county; at Nottingham Castle 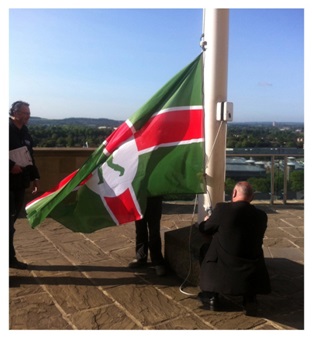 and in Mansfield Market Place

Commenting on the new flag Andy Whittaker, seen below left, said “It’s a simple but striking design and I’m really pleased with it. There is no copyright, so it can be used by everyone”, 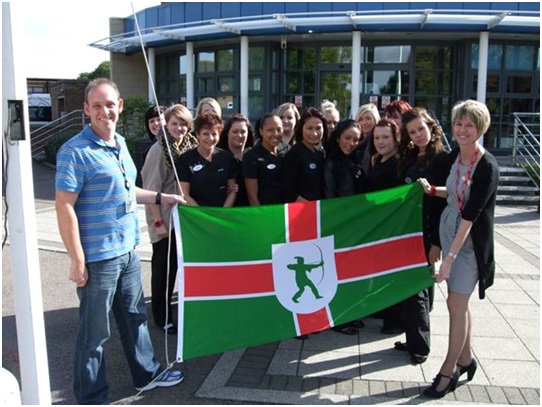 Since the flag’s launch, it has become a common feature in Nottinghamshire, being flown by councils; seen here at Gedling Borough Council’s offices in Arnold; 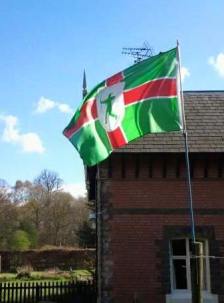 The county flag also adorned the Tourism Centre in Nottingham.

It has been used on key rings

The flag is also used by businesses to promote their Nottinghamshire identity.

The curious fact about the Nottinghamshire flag

however, is that it was not actually the submission of any one competition entrant but rather seems to have been essentially designed by a committee. The remit of the judging panel appears to have been extended beyond merely tweaking a design or two, to actually creating one afresh, albeit reportedly by the merger of a number of elements which had proven popular, from amongst the many entries received. This rather flies in the face of the spirit of a competition, where the best entry wins on its own merit rather than a judging panel itself, tinkering to create a shortlisted design. The winning design appears to be a meld of two entries from Richard Odams 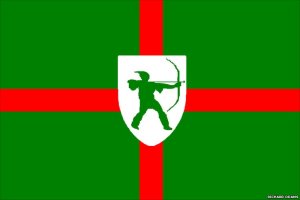 A similar process had occurred in Derbyshire but seems to have been applied with greater latitude here. That said, it must be acknowledged that the winning design does have something of a historical foundation. Amongst the several comments received by BBC Radio Nottingham, one from Brian Benison of, Forest Town, referring to the lines of the famous 17th century poem The Battle Of Agincourt by Michael Drayton, asked “Nottingham had a flag on display at the battle of Agincourt in 1415. Why not re-use it? Let’s be proud of our history.” The poem describes banners borne by a large number of soldiers from various Anglo-Welsh counties at the battle, some of which may be fanciful but nonetheless it is a useful resource, worthy of consideration. Of Nottinghamshire the lines run;

Under a tree with his drawn bow that stood,

Which a chequered flag far off was seen

It was the picture of old Robin Hood

The county flag therefore clearly reflects a centuries old tradition, real or mythical, of being represented by the famous archer.

Prior to the competition a rather poor rendition

(akin to a corporate logo) of the banner of the arms of Nottinghamshire County Council had been commercially available. Also seen here in a better realisation

This armorial banner is formed from the council’s arms

In 2019 the county flag flew over Parliament Square, Westminster

on July 23rd, Historic County Flags Day #countyflagsday and was much in evidence on the inaugural Nottinghamshire Day in 2021 with a formal raising ceremony conducted at County Hall Nottingham 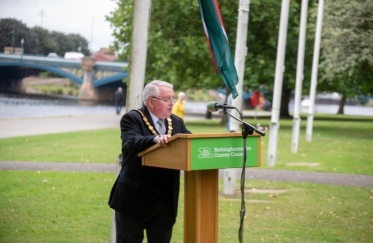 attended by a couple of archers

recalling the the county’s favourite son Robin Hood, who is depicted on the flag and a host of civic dignitaries and county officials 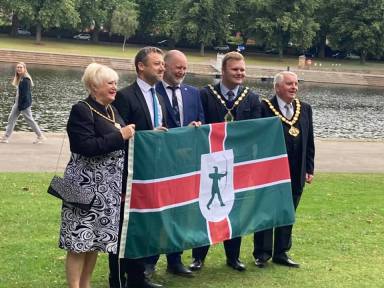 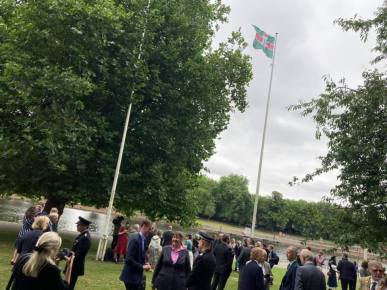 The flag was also raised around the county 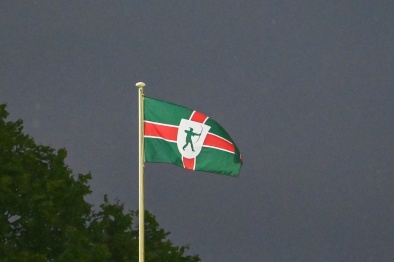 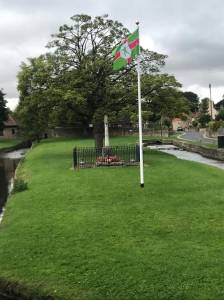