Westmorland’s flag was registered on September 30th 2011. The county probably shares with Huntingdonshire the dubious distinction of being one of the least recognised of our counties. Many people who have enjoyed a break in the Lake District are likely unaware that they have visited the county of Westmorland.

Again, as with Huntingdonshire, the media and modern mapmakers have done little to secure the place of this beautiful county in our minds, consistently referring to or depicting the towns and features that lie in the county, as residing within the administrative territory of Cumbria; there is no such county. This is the name solely of an administration formed in 1974 to take over the duties of former councils in Westmorland, Cumberland, Lancashire and the West Riding of Yorkshire. The county of Westmorland did not cease to exist in 1974 and in an effort to remind people of this fact, an association of concerned individuals formed a Westmorland Association to campaign for a county flag. Registration and use of a flag, it was hoped, would help to remind people that the county had not gone away, as might be demonstrated by its flag flying proudly. The choice of design was a banner of arms of the former County Council of Westmorland

This was felt to be most appropriate because the essential design was familiar to the county’s inhabitants, being seen around the county on old plaques and pictures

and still being used, for example, by the local football association 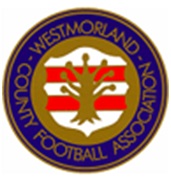 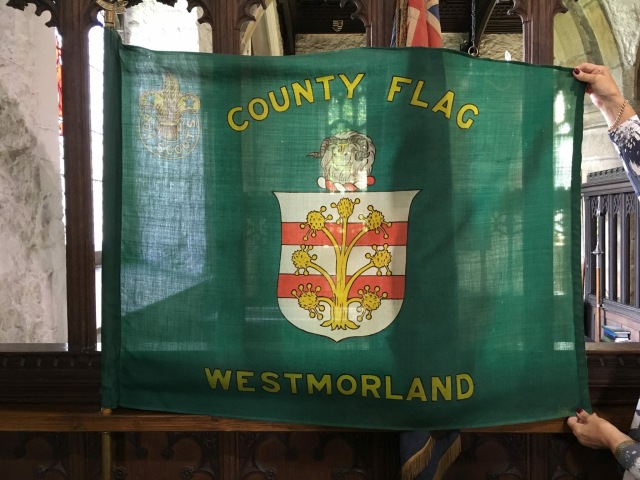 Approaches were made to the Flag Institute about registration of this design: this led to its slight modfication by Chief Vexillologist Graham Bartram who recommended making the edges of the charges on the flag red rather than black, to improve its efficacy, that is its visibility, as a flag. In a situation comparable to Middlesex, as the council no longer existed, there was no longer an arms holder so the arms were effectively free to use. The Westmorland Association was duly advised that if it could demonstrate sufficient local approval of the proposed design, the Flag Institute would happily register it as the county flag of Westmorland. Accordingly support was received from a number of substantial local groups including;

Having secured the backing of these fellow county bodies, the Westmorland Association made a formal and successful request for registration of the flag.

The arms from which the flag is formed were granted to Westmorland County Council by the College of Arms in 1926. The shield combines elements from the northern and southern districts of the county, reflecting the fact that the county had historically always comprised two baronies, “The Barony of Kendal” covering the south and including the towns of Kendal and Kirkby Lonsdale and The Barony of Westmorland covering the northern part of the county, including Appleby-in-Westmorland, the county town.  The two red bars on a white background, are taken from the arms of the de Lancaster family

who were Barons of Kendal. On this was placed a heraldically stylised gold apple tree from the thirteenth century seal of the borough of Appleby

the county town, where it had appeared behind the royal arms (three lions on a shield), as an obvious punning reference to the name of the town. The arms were created in the 1920s. An initial suggestion was an extremely elaborate affair with a shield formed of blue and yellow checks, across these were two wavy red bars each bearing three white rings. Additionally there was a red canton in the top left corner with a yellow (gold) lion rampant. The charges all related to the arms of various local nobility. Objections were raised that this arrangement focused too strongly on elements form the northern section of the county. An alternative was to divide the shield, with the de Lancaster arms (above) to symbolise the southern portion of the shire at left and the coat of arms of Appleby

(essentially the arms of England – granted by King John in the Middle Ages), at the right. This idea was also rejected because such division of the shield was a practice reserved for representation of a marriage (!) and using the royal arms of England anew would require a special royal warrant. A third idea was presented in 1923 with a yellow shield bearing four red bars, the uppermost itself bearing two gold rings; in the top left, a blue canton with a depiction of a lamb – indicative of the local wool trade. This met with little enthusiasm amongst council members. In 1926 a fourth suggestion took the Appleby tree from the above seal, placed on a blue background. A small shield or escutcheon, with the de Lancaster arms, appeared at the centre of the shield. Again the practice of using escutcheons was generally confined to matrimonial representations, the idea was rejected. The aim remained to represent the county with arms that combined an element from its northern barony with a charge from the southern one. All attempts to effect this by compressing arms together in one shield, having been dismissed, a different approach was called for. Finally it was decided that the only acceptable method to demonstrate the union of north and south was to lay one charge from one part, directly over another charge from the other part, without any sort of division of the shield; that is, the tree from the north over the red bars from the south. This was immediately accepted by the College of Arms

Upon registration of the county flag the local MP (for Westmorland and Lonsdale) Tim Farron, expressed his satisfaction “I’d like to congratulate the Westmorland Association for successfully registering the flag. I hope that it will be enthusiastically adopted by all of us who are lucky enough to live and work in this amazing area. I look forward to seeing it flying high when I am travelling around the South Lakes” and indeed, the flag was soon seen aloft over Augill Castle, Kirkby Stephen.

The county flag has also been taken to the county’s highest point, Helvellyn,

the second highest mountain top in England and is seen here 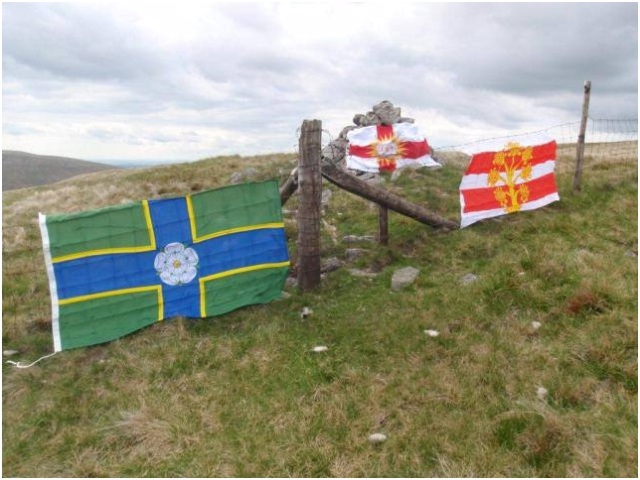 alongside the flags of Yorkshire’s North and West Ridings at the point that all three meet – the post in the centre of the picture.

In September 2013 the Westmorland flag was raised over the county’s agricultural show, held in Kendal. 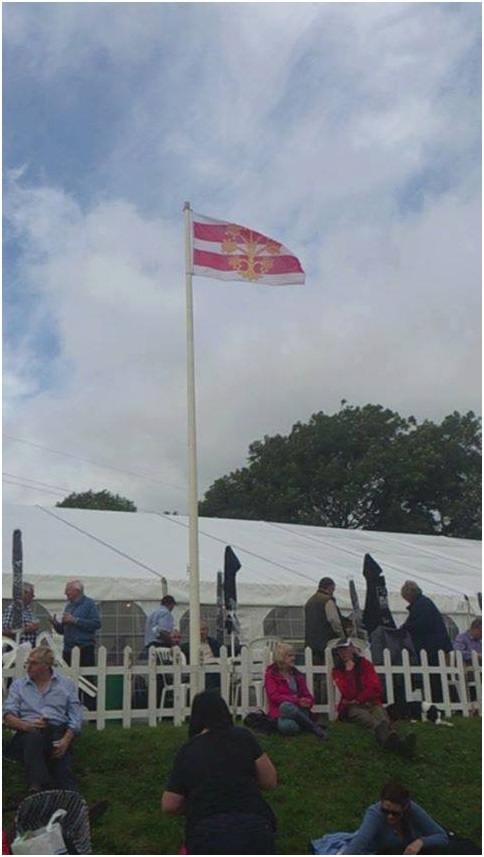 The show was also the scene of a poll to choose a special day to celebrate the cultural heritage of Westmorland. The winning date in this poll was September 29th, the date when the title “Earl of Westmorland” was created. Henceforth September 29th will be recognised as Westmorland Day.

it has been embraced by local sports teams,

at a ceremony marking the start of the mayor of Appleby’s new term in office.

A spurious yellow flag with a Red Cross

described as the flag of Westmorland, is commercially available. This is a private initiative, not based on any obvious local historical usage – it is not the county flag.