The flag of the North Riding

was the winner in a public competition, one of six designs selected by a panel of judges for a final public vote. It was revealed for the first time on May 4th 2013 in the hamlet of Holwick, at The Strathmore Arms

the most northerly pub in the North Riding and Yorkshire and registered accordingly.. The location was specifically chosen to highlight the fact the locality lies within the North Riding, albeit that it is administered by the council in Durham.

The flag was unfurled by the competition’s organiser Andy Strangeway and the Deputy Lord-Lieutenant of North Yorkshire, Peter Scrope 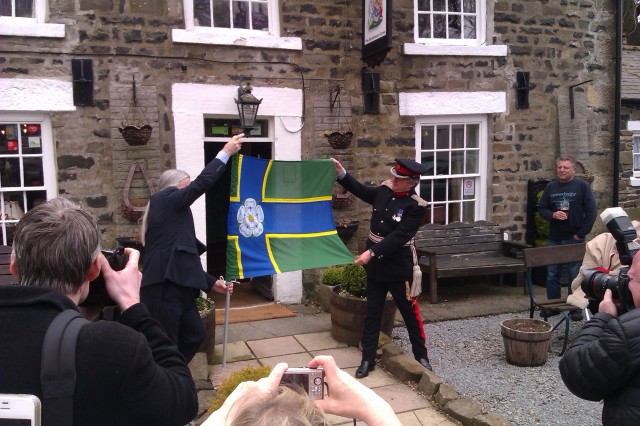 Also attending the ceremony were the Vice-Chairman of Durham Council, the Vice Chairman of North Yorkshire Council and the Mayor of Stockton-on-Tees Council 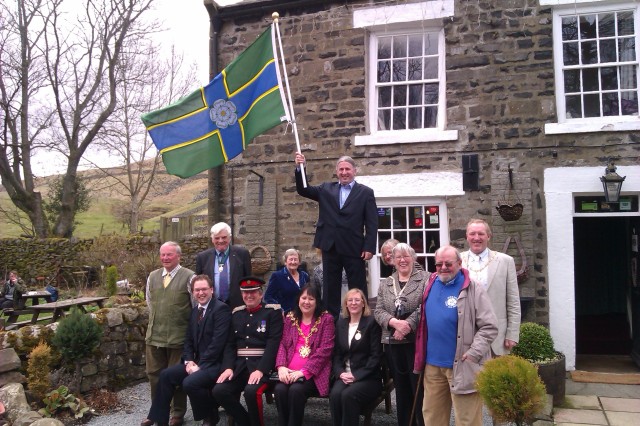 The Rt Hon The Lord Mayor of York sent the following message of support: ‘I am delighted to send greetings from the City of York on the occasion of the unfurling of the new North Riding Flag.  I hope many in the region will look with pride upon this new emblem for the North Riding area.  Very best wishes to all involved in the creation and unfurling of the flag’. The Mayor of Redcar and Cleveland, Cllr Denise Bunn, sent the following message of support: “My sincere apologies that I am unable to attend on Saturday for the North Riding Flag Unfurling.  My very best wishes to you and everybody concerned on what I’m sure will be a lovely day and a special occasion at Holwick.”

The motivation behind the competition was to reaffirm the North Riding’s distinct status as an entity in its own right, despite its territory being administered by various different local authorities and to signal that distinct status, with a distinct North Riding flag. All three Yorkshire Ridings are a thousand years old, with an origin in the era of the Viking settlement around York in the ninth century. The term “riding” originally a “thriding”, is derived from the old Norse “thrithjungr” meaning a third part. With individual courts and lieutenancies the Ridings functioned as de facto counties and were each accordingly awarded a separate council in 1889. The North Riding council bore its own arms, unofficially from 1889

and officially between 1928 and 1974 but there had never been a North Riding flag before the 2013 competition. This was organised by the campaigner, adventurer and Yorkshire resident, Andy Strangeway in liaison with the Flag Institute. While the council had been abolished in 1974 the North Riding itself has never been subject to any abolition.

The flag was designed by Jason Saber. A cross design had featured in the arms of the former North Riding council so with a sense of continuity he maintained the same general pattern but opted to include more vibrant colours that reflected the locality’s vivid environment and landscape.

The yellow edged blue cross recalls the colours (yellow stars on a blue background) of the arms attributed to the local saint, Wilfrid

a major figure in the early history of the region. Set against a green field , the three colours in combination allude to the North Riding’s natural features; the green representing the large tracts of the famed North Yorks Moors National Park, while the blue and yellow reflect the North Sea coastline (with its sandy beaches at Saltburn, Runswick Bay and Redcar Beach for example) and such rivers as the Swale, Tees and Esk. The white rose associated with the county for about six hundred years, which had also featured on the arms of the former North Riding Council, completed the arrangement.

The flag was raised on the inaugural North Riding Day, 22nd August, 2013 at a special ceremony

attended by civic leaders from across the North Riding

including the Lord-Lieutenant, Lord Crathorne and the Chairman of North Yorkshire County Council, Councillor Bateman, seen applauding the raising of the North Riding flag below

and has flown at the Glastonbury music festival 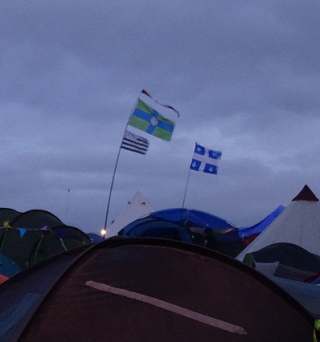 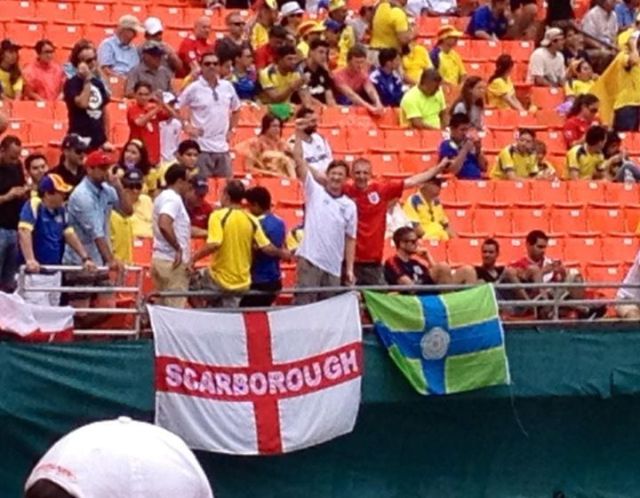