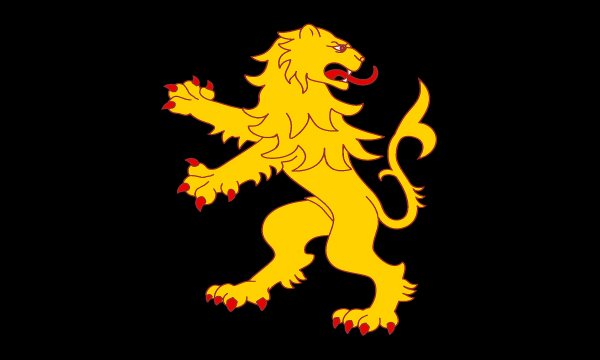 The Welsh county of Ceredigion, known for centuries in English as Cardiganshire, has long been associated with a reguardant lion (looking backwards). This design was attributed as the arms of the ancient Welsh ruler Gwaithfoed and his kingdom of Ceredigion, from which the modern county derives.

Sources indicate that the arms attributed to Gwaithfoed were in fact originally gold with a black lion. 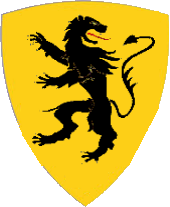 describes a black lion with red claws, looking backwards, as the arms of “Gwaythe Voyde”, “sometime Lord of Cardigan in Wales”. In heraldry the colour black is termed ‘sable’ abbreviated to ‘sa’, yellow is ‘or’ and red is ‘gules’, (gu).

The Pryses of Gogerddan, a noted county family located in Gogerddan in the north, were descendants of Gwaithfoed, one of whom is described in the 1660 revision of John Guillim’s work as bearing his original arms# 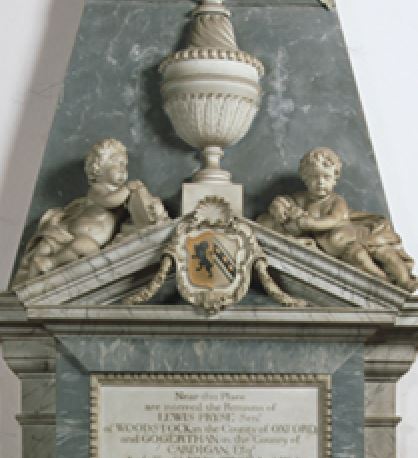 as part of a monument to Lewis Pryse, a one time canon and it appears again in this view of Cardigan Castle with an inscription to “Thomas Pryce Esquire” 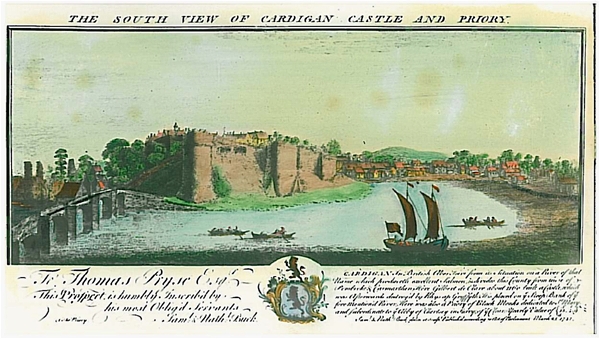 The influence of the Pryses was such that their famed black lion, inherited from their forbear Gwaithfoed, featured heavily locally. An Aberystwyth pub 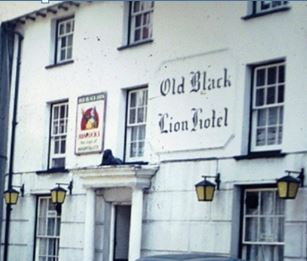 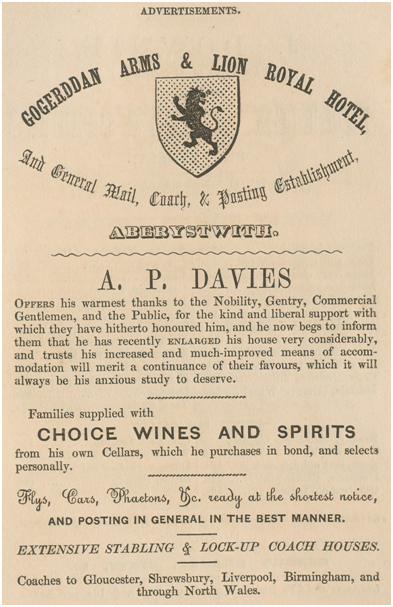 Arthur Charles Fox-Davies and M. E. B. Crookes, in their 1894 work, “The Book of Public Arms” include the following reference to Aberystwyth’s informal adoption of the Gwaithfoed lion as its own arms 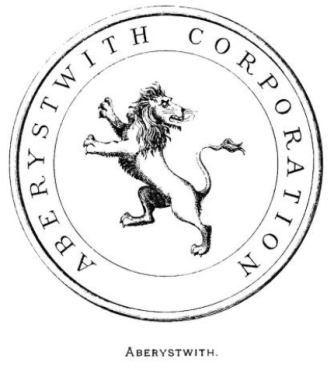 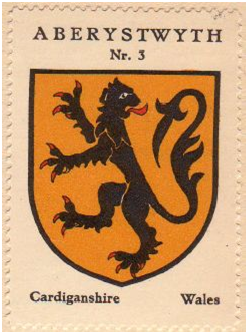 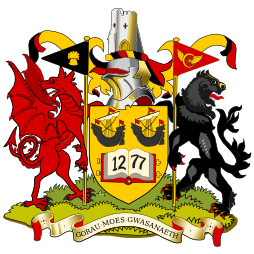 With its trenchant Ceredigion history and importance as a local cultural icon, the lion was naturally included in the arms awarded to the county council, although, seemingly, to avoid usurpation of the Pryses’ personal insignia, the colours were reversed

They appear in the top left canton of a quartered pattern used by the local council. 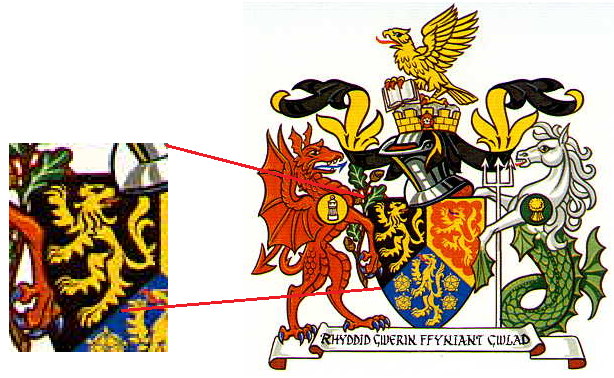 It should also be noted that such switching of the colours of field and charge in attributed arms is not uncommon in early Welsh heraldry. Perhaps the version with a gold lion on black was an alternative arrangement that persisted; by the twentieth century, the council’s use of this alternative certainly provided a distinction from the arms of the prominent local family, an emblem specifically representing the county as an entity in its own right. The subsequent use of the emblem for this very purpose, by the Dyfed administration, indicates that this had become the established form and the locally familiar design. This preferred pattern is now used locally, as seen at the Castle Hotel, Aberaeron 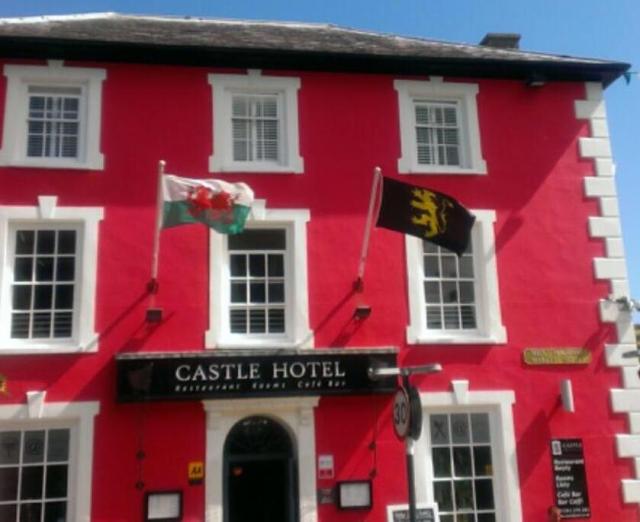 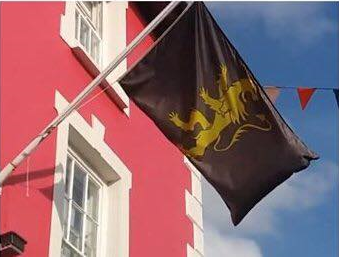 and is on display below 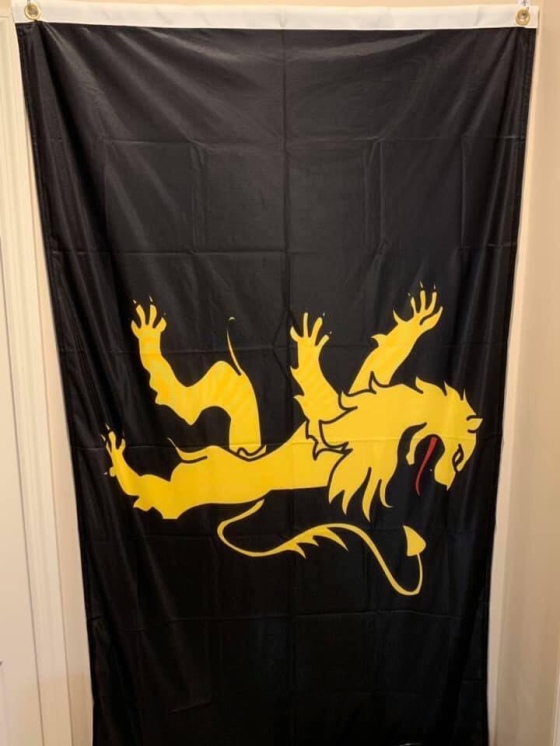 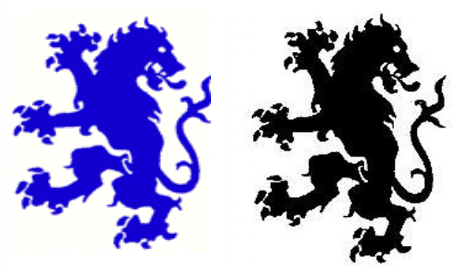 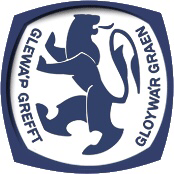 and a red version of the reguardant lion 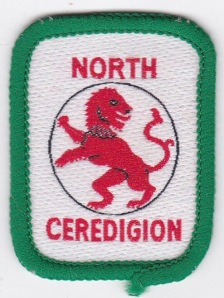 is the badge of the county’s North Ceredigion scout branch. 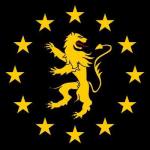 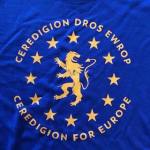 Also attesting to the basic recognition of the reguardant lion as the county symbol, is the general availability of sundry items proclaiming the county of Ceredigion, which depict the design,

The status of this traditional county emblem is indisputable and its registration by the Flag Institute as the county flag of Ceredigion would be easily effected were some substantial county body to request it but all efforts to invite any interested party (about thirty!) to submit such a request have fallen on deaf ears and been ignored. However, registration would simply acknowledge the de facto status of this design,

as the county flag, as evidenced by its demonstrable usage, recognition and commercial availability both as a general county emblem and specifically as a county flag. In 2011 the flag of Buckinghamshire was registered by the Flag Institute on the basis of its evident and indisputable traditional status, without receipt of any registration request, seemingly on the basis that the circumstances of the long standing traditional emblem were so obvious as to make a request unnecessary. Moreover, unlike the ultimately registered Buckinghamshire flag at the time, this design is already flown, as seen above and is commercially available here and here. The precedent having been set and with the same circumstances applying in this instance, this site recognises the gold reguardant lion on black field of Gwaithfoed as the county flag of Ceredigion.

That said, it would of course be preferable to see the Ceredigion lion proudly sitting alongside the flags of sister shires on the national registry. If you would like to help get the widely acknowledged, de facto flag, registered, especially if you are a county resident, please contact British County Flags at our Facebook or Twitter pages. 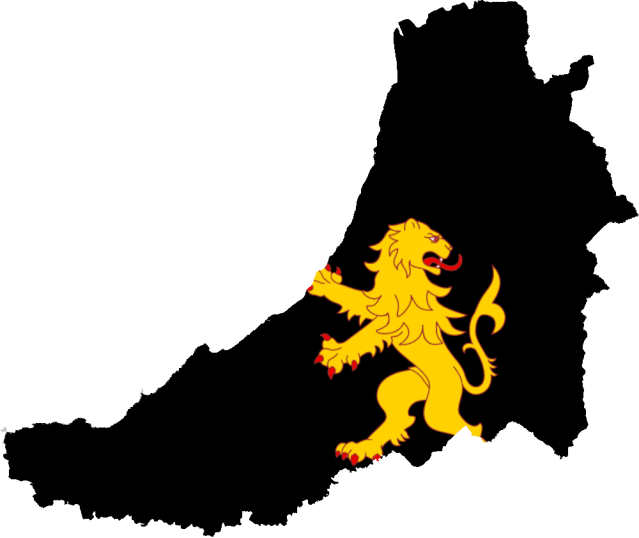