The Rapes Of Sussex

Initially used for administrative purposes, as depicted on this map from Wikishire

along with their constituent “Hundreds”, each of these areas is culturally important to the heritage of Sussex, equal to the Ridings of Yorkshire and the Parts of Lincolnshire, although in the modern era the majority of people in Sussex are not conscious of these unique internal territorial divisions. However, they remain culturally significant and have never been formally abolished. The Sussex Rapes are also prominently displayed on John Speed’s 17th century map of Sussex.

Vexillographer (flag designer) Brady Ells has created the following proposals for flags for each of the Sussex rapes. The designs have a universal look and feel to them to indicate that they represent the Rapes of Sussex, rather than the individual towns or cities from which they take their names. A blue triangle with six gold martlets is placed against the hoist to represent the county and maintains the 3,2,1 pattern of the martlets at all angles

The Rape Of Chichester.

The flag of the Rape of Chichester is charged with 14 red gouttes (tear drops). These drops are from the arms 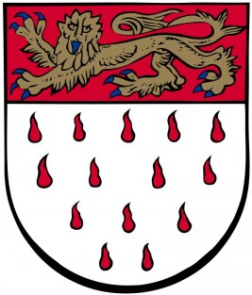 The reasoning behind the gouttes on the city arms is unknown, however they have since become firmly established symbols of the locality and also featured on the border of the arms of the former Chichester Rural District Council.

The Rape Of Arundel 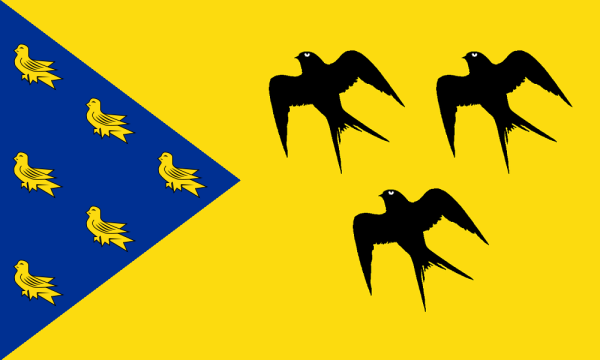 The flag for the Rape of Arundel is charged with 3 black martlets, a symbol with which the town has long been associated. This charge is a pun on the town’s name – a martlet is a heraldic representation of a swallow, which in French is hirondelle a word very similar to the name of the town. Three martlets appear on the town’s civic arms

granted in 1939 and another appears as the crest over the shield.

It should be noted that the three martlets on the flag bear more of a resemblance to a swift, to contrast more effectively with the Sussex Martlets against the hoist. This stylisation also reflects their appearance on earlier town seals

as well as the depiction on the current civic crest, above.

which further appears as a decoration on the town’s Mayoral Chain.

The depiction is also the badge of Arundel Football Club. 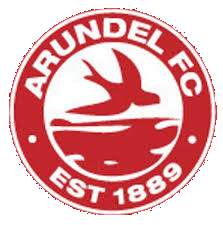 The Rape Of Bramber

The flag of the Rape of Bramber is charged with 5 crosslets. These Crosslets derive from the coat of arms of William VII de Braose

2nd Baron Braose, circa 1298. The de Braose family were ‘Lords of Bramber’ since the rape was established in the late 11th century. Although earlier ancestors and Lords had different coats of arms, it is this coat of arms which stuck and still appears on local insignia, an example being the badge of Beeding & Bramber Cricket Club.

was used by Shoreham Urban District Council from 1933. Another town located in the Rape of Bramber is Horsham upon whose civic arms, granted in 1975, a single crosslet appears with another on the crest over the shield

The arrangement exhibits the town’s links to the Rape of Bramber and the de Braose family.

The Crosslets on the flag of the Rape are blue, reversing the colours of the de Braose coat of arms to facilitate deployment against a gold field.

The Rape Of Lewes

The flag of the Rape of Lewes is charged with a Tower in Gold & Blue checks. A tower has long been used as a symbol of Lewes representing Lewes Castle and features on the badge of Lewes Football Club

whose headquarters is located in Lewes.

, Barons of Lewes since the Norman Conquest whose check pattern also led to the adoption of the Surrey flag , where they were Earls.

The de Warrene checks feature heavily on the arms of the town.

and are used by the town’s swimming club

The arms of Hove

also include the de Warrene checks to denote the town’s location in the Rape of Lewes, as does the badge of Longhill High School 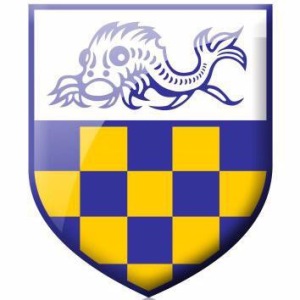 The de Warenne checks are also present in the insignia of Brighton General Hospital.

The coat of arms of Lewes District Council, granted in 1975, makes use of the gold and blue checks as a border, highlighting the District Council’s remit covering part of the Rape of Lewes.

The Lewes flag flying alongside the Sussex county flag

The Rape Of Pevensey

The flag of the Rape of Pevensey is charged with a red spread eagle. The design depicts the ‘Pevensey Eagle’ which originated on the arms

of the de Aquila family. Euguenulf de Aquila came over with William I and was killed at the Battle of Hastings; his descendant, Gilbert de Aquila, was bestowed with the Rape of Pevensey. The area was known between 1106 and 1234 as the ‘Honour of the Eagle’.

This red eagle is found on this example

of Goss ware China from the early twentieth century, appears on the recently installed town sign of Pevensey

and features on the logos of Pevensey Parish Council

which also uses the device for a sailing penannt, set against a field of gold.

Eastbourne’s motorcycle speedway team, based in Arlington, has used the nickname “The Eagles” since it was established in 1937 and used eagle emblems

An eagle further features at right in the chief, the upper section, of the shield on the arms of Seaford Town Council 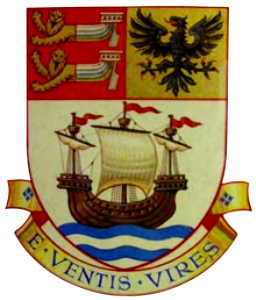 in reference to the Rape of Pevensey and the L’Aquila family. These arms are themselves derived from the mid-19th century, eagle bearing, seal of Seaford

An eagle also appears, as the crest of the coat of arms of Lewes District Council,

granted in 1975, in reference to the council’s remit over part of territory of the Rape of Pevensey.

The flag is seen flying here

in the village of Westham, between the towns of Pevensey and Eastbourne, here 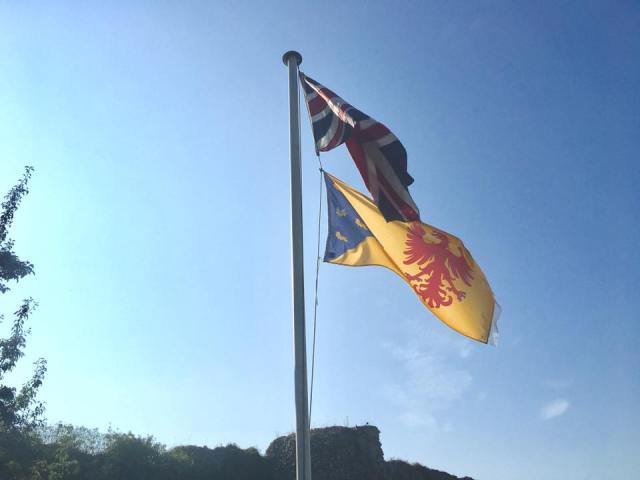 at the Pevensey Court House Museum and here

alongside the Sussex county flag.

The flag of Pevensey is available to buy here.

The Rape Of Hastings

The charge on the flag of the Rape of Hastings is a vessel which first appeared on the common seal of the Barons of Hastings.

These arms derive from the arms of the Cinque Ports

, which are also used to represent both Rye and Winchelsea. 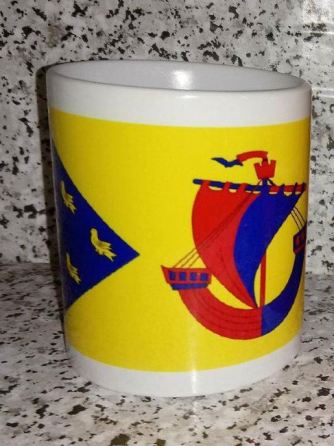 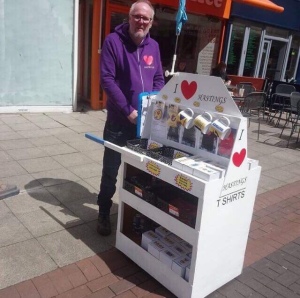